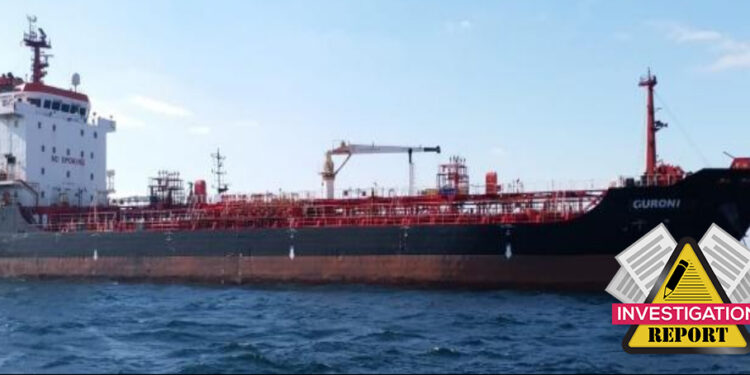 MV Guroni was en route from the port of Klaksvik in the Faroe Islands, Denmark, to Rostock, Germany, in ballast. The vessel was scheduled to take bunkers off Skagen, Denmark.

On 08 January 2019, at 0742, while the vessel was navigating through Skagerrak, an oil mist detector alarm was observed in the engine-room, followed by a lubricating oil low pressure alarm.

Assuming that these were false alarms, the crew members reset the alarms.

At 1100, as the weather conditions worsened, the master decided to reduce the speed of the main engine.

Following the reduction in the main engine’s rpm, the speed of the vessel was observed to be around 4.5 knots.

The oil mist detector alarm sounded a couple of times more in the afternoon, but the system was again reset.

At 1634, while taking a routine round in the steering gear room, the second engineer noticed an abnormal change in the sound of the main engine.

On entering the engine-room, he noticed that the main engine had stopped and there was significant smoke in the area. He also noticed sparks around some of the crankcase covers.

A couple of minutes later, the chief engineer arrived and immediately started to investigate.

He checked the crankcase covers and noticed that the temperatures of all the covers were normal.

After concluding that the smoke was not emanating due to a fire, he opened the engine room skylight in order to vent out the smoke.

In the meantime, the master had ordered for the anchors to be prepared.

At 1645, the chief engineer informed the master that he was unable to restart the main engine. As the master noticed that the vessel was drifting toward land, anchors were dropped at 1706.

After unsuccessful attempts to restart the main engine, it was decided to have the vessel towed to a repair facility in Rotterdam, The Netherlands.

At the repair facility, it was found that the lubrication oil filter of the main engine had been improperly mounted.

This resulted in inadequate lubrication of the main engine, leading to irreparable damage to the crankshaft.

Probable cause of the oil mist alarm

The damages sustained by the main engine’s running gear seem to indicate that these components were subjected to extensive friction.

The friction between the components of the engine would have probably resulted in the generation of high temperatures within the crankcase spaces of the engine due to microwelding, as a result of restricted lubrication.

These high temperatures (hot spots), in turn, would have led to the vaporisation of oil, building up an oil mist, as already explained. This would have triggered the oil mist detector alarm.

Transport Malta recommended the operating company to ensure that the safety management system manual addresses the critical importance of the oil mist detector and lists down the procedures to be followed in case of an alarm.