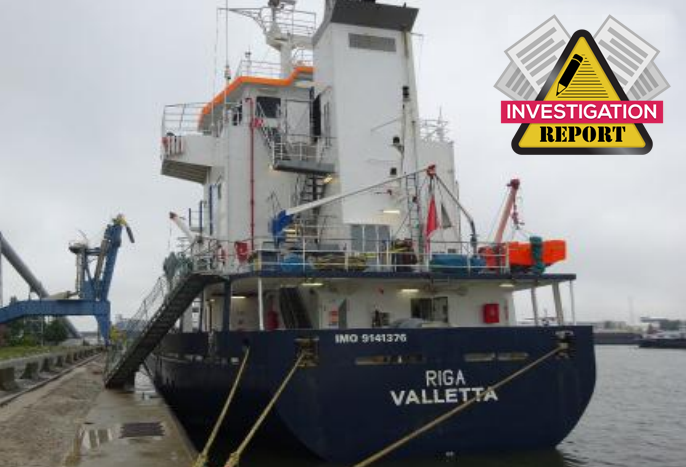 As the report by Transport Malta informs, on 27 May 2019, the chief engineer of MV Riga entered the cargo hold as he noticed water. While on the cargo hold ladder, he fell down the access trunk. The crew members brought him out of the cargo hold and tried to resuscitate him. However, their efforts were unsuccessful.

The chief officer then called the able seafarer over the telephone, asked him to open the cargo hold’s aft access hatch cover and to visually check for the presence of water from the deck.

On reaching the main deck, the able seafarer found the chief engineer and the wiper on the deck, wearing hard hats, coveralls, gloves and safety shoes. The three of them then proceeded to the cargo hold’s aft access hatch and opened it.

On opening the hatch cover and looking inside using a torch light, they noticed water inside the cargo hold. The chief engineer then asked the wiper to go to the engine room and prepare the bilge system to pump out the water, while he and the able seafarer remained near the access hatch.

When the chief engineer was about a few metres below the entrance, the able seafarer saw him suddenly fall into the cargo hold. He called out to the chief engineer and, on not receiving a response, immediately went into the accommodation and informed the bridge via telephone.

The chief officer raised the general alarm and informed the master about the accident. The crew members prepared for rescue of the chief engineer and the third officer, wearing a self-contained breathing apparatus (SCBA) entered the cargo hold.

The third officer secured the chief engineer to a stretcher, following which, at around 1920, the chief engineer was hoisted up onto the deck. The crew members noted that they could neither find a pulse nor a heartbeat, his breathing had stopped and the colour of his skin was bluish. The crew members tried to resuscitate him, while the Italian Coast Guard was informed on the accident. The vessel, around this time, was reported to be about 17 nautical miles off the port of Vieste, Italy.

The following morning, the vessel arrived and anchored off the port of Manfredonia, Italy. Following an investigation by medical and legal personnel of local authorities, the body was transferred from the vessel to be transferred to the local morgue.

An autopsy and toxicology tests were conducted in Italy. The autopsy report attributed the death of the chief engineer to acute asphyxia which resulted from a high concentration of Carbon Dioxide.

The Company was recommended to: 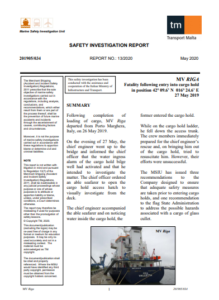