As Transport Malta informs in its report on MV Leopold Staff, while the vessel was underwa to Durban, South Africa, the crew members decided to carry out maintenance and test the free-fall lifeboat launching arrangement. However, as the lifeboat was off the ramp, the hoisting slings started to slide out from their ferrules, until the lifting block recoiled and the lifeboat slid to the water.

The vessel was on an ocean passage from the Port of Spain, Trinidad & Tobago to Durban, South Africa. Monthly maintenance jobs for the free-fall lifeboat (FFLB) were scheduled for the morning of 25 May 2019. The chief officer completed a ‘dangerous work permit’, which included a risk assessment, and had it approved by the master.

Before starting the maintenance works, the chief officer, the third officer and the bosun carried out a visual check on all the lashing arrangements and hoisting wires and found them in good condition. The chief officer asked the bosun to start the davit winch, to enable them to lower the floating beam unit and connect the hoisting slings to the lifeboat.

The chief officer instructed the bosun to lower the lifeboat back on the ramp and slide it down, to allow for maintenance works on the rollers. The bosun lowered the lifeboat to a distance of about two metres. As soon as the bosun stopped lowering, it was observed that the hoisting slings were slipping from their ferrule, one by one. In that moment, the floating beam unit recoiled and the lifeboat slid down to the water.

The man overboard alarm was sounded and preparations were made to retrieve the lifeboat. The rescue boat was deployed the crew boarded the lifeboat.

Due to the three metre swell that was rolling the vessel slightly and due to the absence of sound hoisting slings on board, the master assessed that the recovery of the lifeboat by using the lifeboat’s davit, was dangerous. In view of the situation, he decided to secure the lifeboat on deck by the use of the vessel’s cargo crane.

Other factors that contributed to the accident were the following:

The Merchant Shipping Directorate was recommended to: 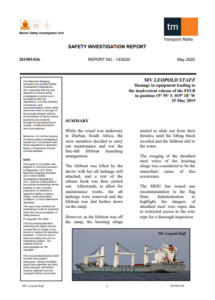