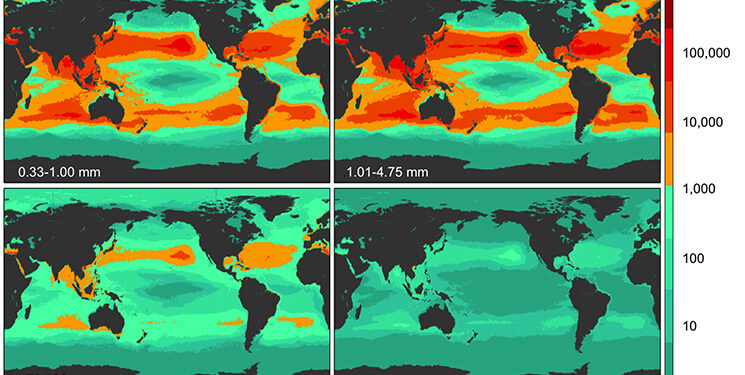 Nearly 269,000 tons of plastic pollution may be floating in the world’s oceans, according to a study published December 10, 2014 in the open-access journal PLOS ONE by Marcus Eriksen from Five Gyres Institute and colleagues.

Microplastic pollution is found in varying concentrations throughout the oceans, but estimates of the global abundance and weight of floating plastics, both micro and macroplastic, lack sufficient data to support them. To better estimate the total number of plastic particles and their weight floating in the world’s oceans, scientists from six countries contributed data from 24 expeditions collected over a six-year period from 2007-2013 across all five sub-tropical gyres, coastal Australia, Bay of Bengal, and the Mediterranean Sea. The data included information about microplastics collected using nets and large plastic debris from visual surveys, which were then used to calibrate an ocean model of plastic distribution.

Based on the data and model, the authors of the study estimate a minimum of 5.25 trillion plastic particles weighing nearly 269,000 tons in the world’s oceans. Large plastics appear to be abundant near coastlines, degrading into microplastics in the 5 subtropical gyres, and that the smallest microplastics were present in more remote regions, such as the subpolar gyres, which the authors did not expect. The distribution of the smallest microplastics in remote regions of the ocean may suggest that gyres act as ‘shredders’ of large plastic items into microplastics, after which they eject them across the ocean.

“Our findings show that the garbage patches in the middle of the five subtropical gyres are not the final resting places for the world’s floating plastic trash. The endgame for micro-plastic is interactions with entire ocean ecosystems,” says Marcus Eriksen, PhD, Director of Research for the 5 Gyres Institute.

You may read the study by clicking here.

Source and Image Credit: PLOS ONE

In the beginning, I was straightforward with you propecia before and after has changed my existence. It has become much more fun, and now I have to run. Just as it is incredible to sit.