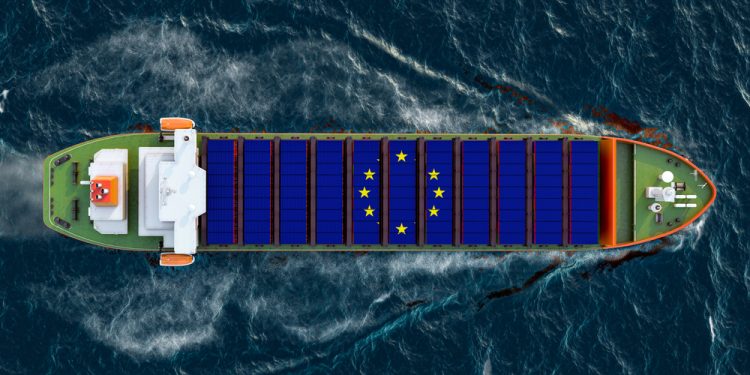 On November 29, EU negotiators agreed to bring shipping into the EU’s carbon market (ETS), after landing preliminary agreement for CO2 quotas for maritime.

The deal will ensure shipping polluters pay and “shows that the EU can regulate emissions beyond its borders,” says T&E.

With this ambitious ETS covering all greenhouse gases, offshore vessels and ensuring funding for green shipping, the EU has thrown the gauntlet down to other jurisdictions like the US, China, and Japan to make this hugely important first step towards zero-emission shipping.

However, these figures are not conclusive, as they must be confirmed by member states; something that will happen during the next negotiating round.

In addition, non-CO2 emissions, such as methane, soot, and nitrous oxide, will be included from 2026. Furthermore, negotiators also included an earmarking for 20 million CO2 pollution credits, meaning that funds generated by these certificates will be reinvested into the sector through an innovation fund.

In addition, Reuters cited Peter Liese, lead EU lawmaker on the rules, saying that “the rules would encourage ship owners and operators to invest in the best available technologies such as less polluting fuels.”

Negotiators also agreed to dedicate revenues from the sale of 20 million EU carbon permits to fund maritime emissions-cutting projects. The legislation will be applicable to all ships over 5,000 gross tonnes, leaving smaller vessels exempt. Nevertheless, the European Commission will review this aspect in the future, to ensure no loopholes are open.

European shipowners welcome the increased climate ambition of the ‘Fit for 55’ package, recognising that the climate crisis is one of the greatest economic and environmental challenges faced by our society. Decarbonising shipping is not a question of ‘if’ but a question of ‘how’

He further added that setting aside part of the ETS revenues for maritime is a victory for the decarbonisation of the sector. “Dedicated support through the Innovation Fund is key to bridging the price gap with clean fuels, improving the energy efficiency of ships, fostering innovation and building the infrastructure in ports. We look forward to working with the Commission and the stakeholders to develop effective tools for the industry’s transition.”