In 2009 the Coast Guard determined that the Republic of Madagascar was not maintaining effective antiterrorism measures in its ports with the exception of the port of Toamasina (also known as Tamatave). This Advisory clarifies the exception and aligns it with the IMO Port Numbers listed in the International Maritime Organization’s Global Integrated Shipping Information System (GISIS) database.

Actions required as listed in paragraphs C and D of this Port Security Advisory (see below) remain in effect for vessels that
arrive in the United States after visiting ports in Madagascar, with the exception of Toamasina (also known as Tamatave), Madagascar International Container Terminal Services Ltd (MICTSL), Ambatovy Bulk Jetty Terminal, and Platefore Petrolier GALANA, as one of their last five ports of call.

All vessels arriving to the United States that visited the countries listed in paragraph B of USCG Port Advisory (see below), with exceptions noted, during their last five port calls must take the following actions:

2. Ensure that each access point to the ship is guarded and that the guards have total visibility of the
exterior (both landside and waterside) of the vessel. Guards may be:

3. Attempt to execute a Declaration of Security;

4. Log all security actions in the ship’s security records; and

5. Report actions taken to the cognizant U.S. Coast Guard Captain of the Port prior to arrival in the U.S.

Failure to properly implement the aforementioned actions may result in delay or denial of entry into the United States.

Based on the findings of the Coast Guard boarding or examination, the vessels that visited the countries listed in the advisory (see below), with exceptions noted,  on or after the effective date, may be required to ensure that each access point to the ship is guarded by armed security guards and that they have total visibility of the exterior (both landside and waterside) of the vessel while in U.S. ports.

The number and location of the guards must be acceptable to the cognizant U.S. Coast Guard Captain of the Port. For those vessels that have demonstrated good security compliance and can document that they took the aforementioned measures, the armed security guard requirement will normally be waived. 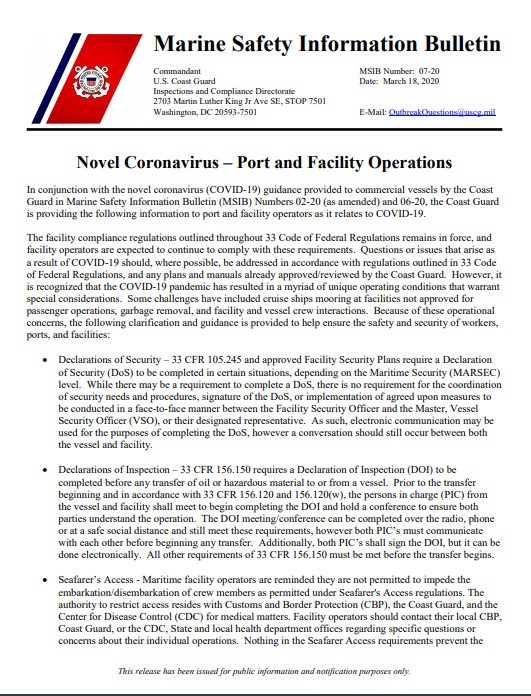