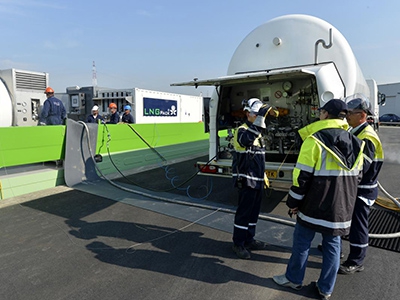 Truck-to-ship bunkering is already possible, but by setting up a bunkering station the port of Antwerp aims to make LNG permanently available.

In comparison with the diesel fuel currently used by European barges, LNG is much cleaner and environment-friendly. Barges powered by LNG emit hardly any particulates, and NOx emissions are drastically reduced.

Truck-to-ship bunkering has already been possible in the port of Antwerp since 2012: a truck collects LNG at the LNG import terminal in Zeebrugge and takes it to Antwerp. The truck then parks on the quay from where the LNG can be delivered to the barge. By building a permanent bunkering station LNG will be available in the port at all times. In this way Antwerp Port Authority seeks to break out of the chicken-and-egg situation: by making LNG permanently available it is hoped that the barge industry will be more willing to make the necessary investments for switching to this more environment-friendly fuel.

Antwerp Port Authority has therefore issued a European call for tenders in order to find a partner to design and build a LNG bunkering station. It must also be possible for trucks to fill up with LNG at the station. In the meantime the Port Authority is also allowing for the possibility that a private company may take the necessary initiatives to permit LNG bunkering at a permanent station.

Construction of the bunkering station will partly be subsidised by the LNG Master Plan for the Rhine-Main-Danube, a project that forms part of the European Commission's TEN-T programme. The aim of this Master Plan is to promote the use of LNG as a fuel and its carriage as a cargo by European barges. In order to assure continuity and achieve the maximum impact in the Rhine corridor, Antwerp Port Authority is collaborating closely with its counterparts in Basel, Mannheim, Rotterdam and Strasbourg, for which a collaboration agreement was signed on 25 April 2014 at the Central Commission for Rhine Transport in Strasbourg.

The Antwerp Port Police Regulations were extended at the beginning of this year to cover LNG bunkering, thus providing a regulatory framework for truck-to-ship, ship-to-ship and terminal-to-ship bunkering with LNG in the port of Antwerp. The bunker checklists permit LNG bunkering to be carried out in a safe and efficient way.