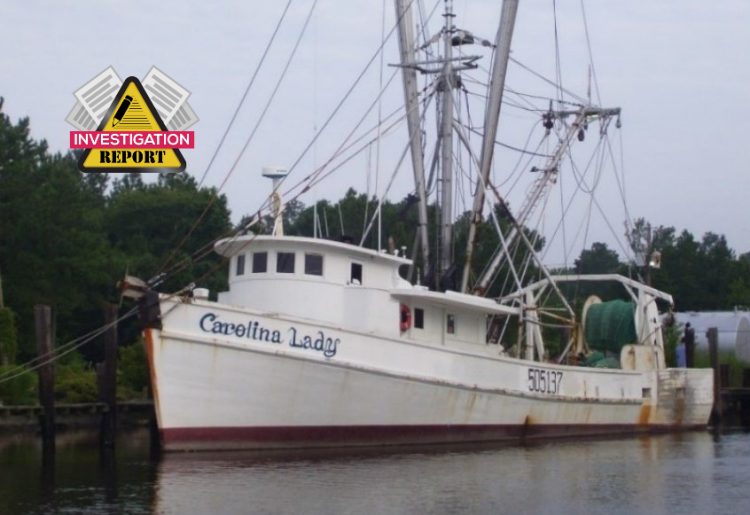 National Transportation Safety Board (NTSB) published a report regarding a captain’s decision to leave the wheelhouse unattended as the vessel transited the St. Marys Entrance on autopilot, resulting in the vessel’s  grounding and sinking off Cumberland Island, Georgia.

On June 9, 2021, at 0800, the crew of the Sage Catherine Lane left the anchorage in Cumberland Sound and began transiting outbound on the St. Marys River to engage in shrimping offshore. About 0900, the captain maneuvered the vessel outside of the navigation channel and continued on an easterly course between the red buoys and the northern jetty, due to high traffic within the channel. As the vessel transited parallel to the channel outbound, crewmember 1 went to the bow to secure the anchor, and crewmember 2 went to his room. The captain, who was alone in the wheelhouse, set the vessel’s autopilot to maintain the vessel’s heading out of the inlet to open water as the vessel started passing the jetty.

The vessel was transiting at a speed of 9 knots. He answered a cell phone call and then proceeded down to his bunk room. About 0915, while the captain was still on the cell phone and in his room, he felt the vessel turn abruptly to port. The captain returned to the wheelhouse to investigate, and as he arrived, he saw that the vessel was heading toward the northern jetty. The captain attempted to turn away from the jetty, and he put the vessel’s engine in reverse, but the Sage Catherine Lane struck the jetty and grounded before his actions could sufficiently stop or turn the vessel.

The captain and crew donned life jackets and abandoned the vessel, and the crew of a Good Samaritan vessel, who witnessed the incident, rescued them from the water. Crewmember 2 sustained a minor laceration to his right hand while abandoning the vessel but did not seek additional medical care. The vessel remained on the jetty for 2 days, and then it broke apart and sank following a thunderstorm on the third day.

The vessel’s reported sharp turn to port (about 90°) while transiting outbound on autopilot indicated that the system failed. The sudden sharp turn likely resulted from the helm/autopilot receiving a signal that the vessel was far from its programmed heading and required significant rudder correction to return to the original heading. Based on the information provided to investigators (due to the sinking, a postcasualty exam was not possible), this sudden change could have been caused by the loosening or detachment of the autopilot rudder angle sensor, which resulted in the transmission of incorrect rudder position data to the autopilot that subsequently commanded a large port rudder angle. The captain had previously tried to repair the rudder angle sensor 2 days earlier by tightening it with zip ties.

Navigating in channels and harbors requires quicker reaction times due to traffic, currents encountered, and frequent course changes. It also requires more rudder due to slower speeds. Therefore, autopilot use is often discouraged or prohibited in restricted waters. Because the Sage Catherine Lane was operating outside the channel and closer to the northern jetty, there was very little time to gain control of the vessel when the autopilot failed. However, the captain was not in the wheelhouse—he had left it unattended to go below.

Leaving the wheelhouse unattended is imprudent, especially when navigating areas like the St Marys Entrance, which included a narrow navigation channel, two jetties, and vessel traffic. Had the captain stayed in the wheelhouse after engaging the autopilot, he would have been able to respond and take control of the vessel after the autopilot system failed and caused the rudder to turn to port.

The National Transportation Safety Board determines that the probable cause of the grounding of the fishing vessel Sage Catherine Lane was the captain’s decision to leave the wheelhouse unattended as the vessel transited the St. Marys Entrance on autopilot, leaving insufficient time to respond when the autopilot failed and caused the vessel to go off the set course.

Save navigation with autopilot: Autopilot use does not relieve the operator of responsibility to conduct a proper navigation watch. Use of autopilot should not be a justification for an operator to leave the wheelhouse or bridge unattended in confined waters. Navigating in channels and harbors requires quicker reaction times due to traffic, currents encountered, and frequent course changes, and more rudder due to slower speeds. Therefore, autopilot use is often discouraged or prohibited in a harbor entrance or narrow channel.