Recently, the North P&I Club issued its revised guide on evaluating the risk of sanctions, focusing on the application and scope of the U.S. and EU sanctions, in regards to their jurisdiction over companies; whether other sanctions apply to trading partners- such as banks, insurers or reinsurers or whether there are there any “party” related sanctions which impact on the ability to complete the contemplated trade, among other issues.

Even if one does not fall within the scope of sanctions imposed by the EU, the sanctions may still be relevant because they may impact on other parties such as your brokers or insurers.

If there are express restrictions on the ability to provide insurance in respect of the trade, then usually that restriction on insurance will apply whether one falls within the jurisdiction of the EU sanctions.

Therefore, it is possible that the trade may not pose a sanctions risk for you, but if you were to complete that trade, insurance cover for example would not be available.

If the entity appears on the EU list of targets (“designated person”) then their assets are frozen- meaning that, “if you fall within the jurisdiction of the EU sanctions, it is an offence to make funds (or other assets that can be converted into funds) available, directly or indirectly to or for the benefit of these sanctioned parties.”

The Club notes that exclusions to these prohibitions are extremely limited; even if a search of the list reveals no “hits” that may not be the end of the matter. Where a party is majority owned or controlled by a designated party it may fall within the prohibitions.

In addition, there are further U.S. sanctions with extra-territorial effect, and which apply to non-U.S. persons (so called “secondary sanctions”).

To make matters more complicated, on occasion it may be unclear to what extent sanctions are intended to be “secondary sanctions” or it may be that the particular sanctions extend the definition of U.S. persons.

It is also possible for non-U.S. persons to be subject to the U.S. jurisdiction if they cause a U.S. person to engage in a prohibited transaction.

Moreover, the Club states that

by party related sanctions, we are referring to the sanctions against entities, vessels, bodies and individuals targeted by sanctions.

It is added that the list of EU and U.S. sanctions targets is publicly available and easily searchable.

In respect of which parties to check, one can check that any charterers (and owners if chartering the vessel) are not targeted by sanctions.

It may also be that another party involved in the trade, whether that be for example the shippers, receivers, end user, port authorities or agents, may be sanctioned.

Therefore, the more parties that can be checked the better, and indeed the U.S. has advised those operating in the petroleum trade that it is good practice to complete due diligence not only in respect of direct counterparties but also into any parties and vessels connected to the trade.

More specifically, the U.S. list provides helpful information on the program (e.g. Iran) under which a particular entity is sanctioned and contains additional sanctions information such as “subject to secondary sanctions” if non-U.S. persons are also prohibited from dealing with the entity. Guidance was issued in August 2014 on dealing with entities owned by individuals or entities designated.

The North P&I Club stresses that

If any entity is owned in the aggregate, directly or indirectly, 50% or more by one or more blocked persons it is itself considered a blocked person regardless of whether that entity itself is listed.

What is more, even if one is comfortable that the parties involved are not targeted by sanctions, it may be that the underlying activity, for instance the carriage of a particular cargo, is still sanctionable.

It is possible for none of the parties to be subject to sanctions but for you to commit an offence or breach sanctions because the activity is sanctionable or vice versa. One should therefore consider both whether there are any restrictions on the trade and activity under consideration, as well as the identity of the parties involved.

One of the issues which frequently arises in the sanctions field is that there is often a difference between what is legally possible and what is practically possible.

For instance, a bank or other party’s compliance policy may go further than the legal position and include blanket prohibitions on transactions linked to a particular sanctioned country. It may be that a party trades as if it was a U.S. person and subject to U.S. primary sanctions even if legally it does not fall within the definition of a U.S. person.

Many companies will simply refuse to complete any business with a U.S. Specially Designated National whether or not legally they would be prohibited from doing so.

Therefore, it is dangerous to assume that simply because a trade is lawful that it can be performed without difficulty.

In particular, the blocking and returning of hire or freight payments is frequently an issue for parties, where no party is sanctioned but the relevant bank is unable to process the payment as to do so would violate its internal policies and procedures.

What is more, there may also be a debate about the legality of a proposed transaction where much of the sanctions’ legislation is broadly but imprecisely drafted.

For insurers there will be occasions where there are practical, as well as legal, limits on the assistance that may be provided, as set out overleaf.

Lastly, the Club questions the trade’s impact on insurance covers.

It is said that, “we are not able to confirm that cover will definitely remain in place for any contemplated voyage, not least because the sanctions position may change, or further details of the voyage may emerge.”

Secondly, there may be occasions where practical issues mean that whilst P&I Club cover would remain in place (subject as ever to the Rules), there may be difficulties in actually obtaining the benefits of Club cover, whether that be the provision of a Club letter of undertaking, settling a claim or the appointment of a surveyor.

If, for example, the lawful assistance of a third party in a high-risk country is required but there are difficulties in establishing a payment route to make payment to that third party, the services required may not be capable of being provided.

Further, where the provision of security is requested, the insurer may well wish to be comfortable not only that legally they are able to provide such security, but that practically they will be able to make a payment to the beneficiary when the security is triggered.

Rule 38(h) of the P&I Rules provides for a cesser of that vessel’s entry if that vessel is employed in a carriage, trade or on a voyage which, or the provision of insurance for which, will thereby in any way howsoever expose the Club to the risk of being or becoming subject to any sanction, prohibition or adverse action in any form whatsoever by any state or international organization.

The Club highlights that

There might be no risk of sanctions against you as the Member, but the cesser would still apply automatically if the Club was in any way exposed.

In addition, Rule 19(c) provides that there shall be no recovery where the provision of cover, the payment of any claim or the provision of any benefit in respect of those liabilities, costs and expenses would expose the Club to the risk of being or becoming subject to any sanction, prohibition or adverse action in any form whatsoever by any state or international organization.

Rule 26 provides that there shall be no claim on the Club if it arises out of or is consequent upon an entered vessel carrying contraband, blockade running or being employed in an unlawful trade.

Lastly, Rule 43(3) provides that the Club is not liable to a Member for that part of any claim it cannot recover from Reinsurers (which would include other pool clubs and the collective and captive reinsurances) by reason of any sanction, prohibition or adverse action by any state or international organization or risk thereof.

To explore more about the Guide on Sanctions, you can click on the PDF bellow. 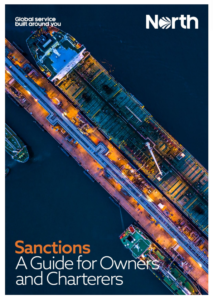