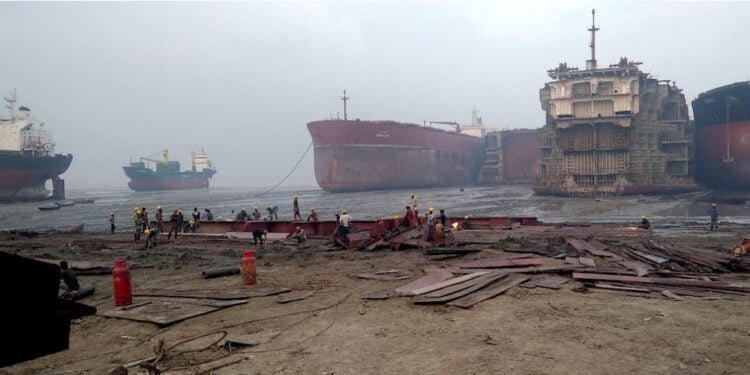 According to new data released by the NGO Shipbreaking Platform, 763 ocean-going commercial ships and floating offshore units were sold to the scrap yards in 2021.

Of these, 583 of the largest tankers, bulkers, floating platforms, cargo and passenger ships ended up on the beaches of Bangladesh, India and Pakistan, amounting to near the totality of the gross tonnage dismantled globally.

We have been witnessing this environmental and human rights scandal for too long. All ship owners are aware of the dire situation at the beaching yards and the lack of capacity to safely handle the many toxic materials onboard vessels 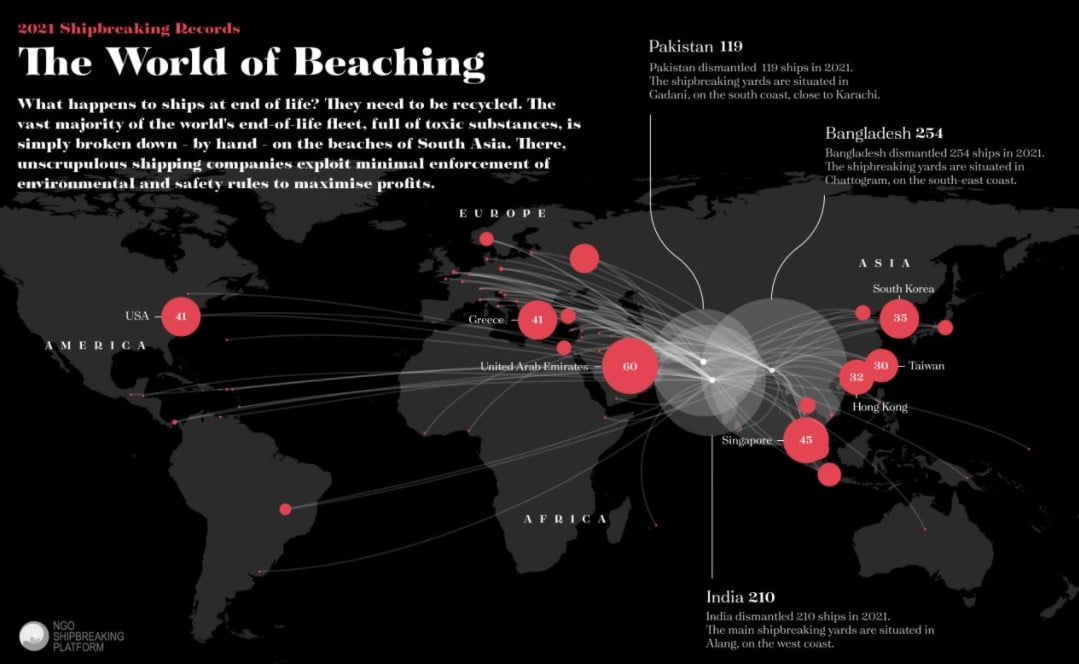 In South Asia, workers are exposed to immense risks, as dangerous working conditions, including fires and falling steel plates, kill or seriously injure numerous workers. According to the NGO, many more are sickened by exposure to toxic fumes and substances that can be found within the ships’ structures.

In 2021, at least 14 workers lost their lives when breaking apart vessels on the beach of Chattogram, Bangladesh, and another 34 were severely injured. Local sources also reported two deaths in Alang, India, and two deaths in Gadani, Pakistan.

The sector suffers from a serious lack of transparency, and it is expected that several accidents go unreported.

In addition, in 2021 the worst country dumper were the United Arab Emirates. UAE owners sold 60 ships for scrapping in South Asia, most of which were beached in Bangladesh and Pakistan. Singapore, Greece and the United States of America follow with more than 40 ships beached each.

South Korean Sinokor was 2020’s runner-up for worst corporate dumper, with the NGO noting that their practice has not improved and they now top the list of 2021 worst dumper, having scrapped 12 of their carriers and LNG tankers in Bangladesh and Pakistan.

Furthermore, the pandemic continued to affect the cruise shipping sector, with more companies taking steps to reduce operating expenses, including the retirement of relatively young vessels. Whilst major cruise lines have committed to use EU-approved recycling yards, “other unscrupulous owners have opted for the more profitable beaches in South Asia. As revealed by the Platform and BBC’s File on 4, several passenger ships, including the COLUMBUS, the MAGELLAN, the MARCO POLO and the RIGEL I, illegally left EU waters for scrapping in India under the false pretext of further operational use.”

What is more, almost half of the ships sold to South Asia in 2021 changed flag to one of the black-listed flags of Comoros, Palau and St Kitts & Nevis just weeks before hitting the beach.

mentions the NGO, with Ingvild Jenssen – Executive Director and Founder – NGO Shipbreaking Platform, adding that while the EU recently reaffirmed in its proposal for a new regulation on waste shipments that shipbreaking is a question of environmental justice, “the infamous shipbreaking beaches of South Asia remain the preferred scrapping destination for many well-known European shipping companies.”

The EU has so far approved 44 sites around the world as operating in a safe and environmentally sound manner. No South Asian yard has been approved due to the lack of capacity to safely handle and dispose of hazardous materials, and the lack of infrastructure to provide for emergency response. Only 37 vessels were recorded recycled in EU-approved facilities in 2021.

What is more, during 2021, five workers lost their lives at the Turkish ship recycling yards in Aliağa. On 4 February, a worker died when hit by a steel block which he was torch-cutting in the secondary cutting area of EU-approved yard Simsekler.

On 12 July, two workers were onboard a cruise ship owned by Carnival at Metas yard when they were suddenly caught by flames. One died on the spot, while the other succumbed due to severe burns three days later at the nearby hospital.

Two months later, two more workers were fatally hit by a rope that broke during dismantling operations at the same facility, which was recently acquired by EU-approved yard.

Clean and safe solutions are available, and in light of new policies aimed at promoting a circular economy, several companies are now exploring the use of abandoned dry docks for the recycling of vessels.