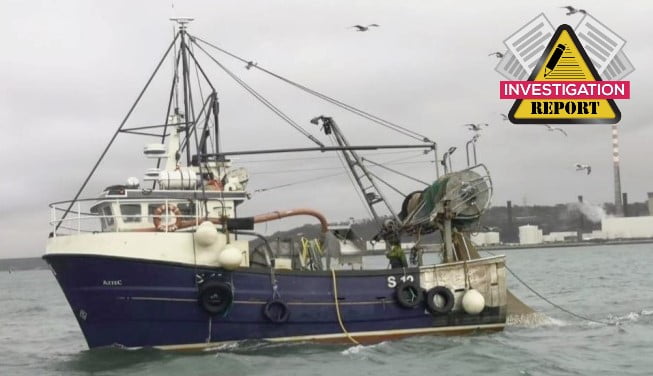 The Irish Marine Casualty Investigation Board (MCIB) published its report on the sinking of FV Aztec, which took place off Duncannon, on 11 January 2021.

On the morning of 11 January 2021 the “FV Aztec” sailed from Duncannon Pier, Co. Wexford to fish sprat in Waterford Estuary alongside its paired trawler the “FV Western Dawn”.

There was no risk assessment or method statement for this type of fishing arrangement included in the vessel’s safety statement.

At 10.00 hrs the “FV Western Dawn” shot its net for the “FV Aztec” to take the end for the next tow. During this operation, the towing weight for the net dropped from the gunwale onto the starboard aft deck of the “FV Aztec”.

This punctured a hole of approximately 300 centimetres in the deck roughly 200cm forward of the transom. Due to the amount of gear around this area of the deck the damage went undiscovered at this time. The fishing weight was made up of a collection of chain and weighed 350 kg.

The Gilsen winch and lifting derrick are situated starboard forward. The Gilsen winch was then secured to the bag rope/lifting strop and the cod end was taken onboard, one lift at a time allowing the fish to enter the fish room via scuppers on the deck.

As the fish were being taken onboard the “FV Aztec” the Skipper noticed the water was not clearing off the aft deck in the usual manner.

At the same time a crewmember noticed water flooding into the steering compartment through a hole in the deck. The crewmember attempted to stem the flow with an oilskin and alerted the Skipper.

As the steering compartment flooded, the vessel lost its reserve buoyancy aft and began to settle by the stern. The crew tried to let go the net as the Skipper manoeuvred alongside the “FV Western Dawn”.

Once alongside, with the stern going under water the Skipper of the “FV Aztec” instructed the crew to abandon ship and to transfer across to the other vessel. At this stage the fish hold bilge alarm sounded as the fish hold began to flood through deck scuppers and the open hatch.

Time did not allow for activation of the engine driven bilge pump or the large electric fish pump. The rate of flooding and settling by the stern would have made any attempt to evacuate water by these pumps futile

The crew of the “FV Aztec” successfully transferred to the “FV Western Dawn” dry, and watched their boat sink in less than one minute. The vessel settled by the stern as the water filled into the fish hold and into the engine room through the open watertight door.

No pollution was detected in the vicinity of the sinking between the time of the incident and recovery of the vessel on 29 January 2021.

The vessel was heavily laden at the time and dependant on the buoyancy provided by the steering compartment to maintain its longitudinal stability.

It was stated during recovery operations that the “FV Aztec” had between ten and 12 tonnes of fish onboard. Although no limits are set for vessels of this size, the loading of the vessel was a contributory factor in the sinking.

This must take into account the weight of the catch onboard as well as the positioning of fish in the hold. The effect of the additional catch being taken onboard at the time of the incident will have also caused considerable settling by the stern and listing to starboard. The combination of these forces will have left the longitudinal stability of the vessel dependant on the buoyancy provided by the steering compartment.

Furthermore, no alert was sent out by the “FV Aztec” or by the “FV Western Dawn”. First notification of foundering of the vessel to MRCC Dublin was from the shore. Although there was no imminent danger to life, as a serious incident occurred, a Pan-Pan alert should have been raised with the Coast Guard.

After the conclusion of the report, MCIB recommends the following: