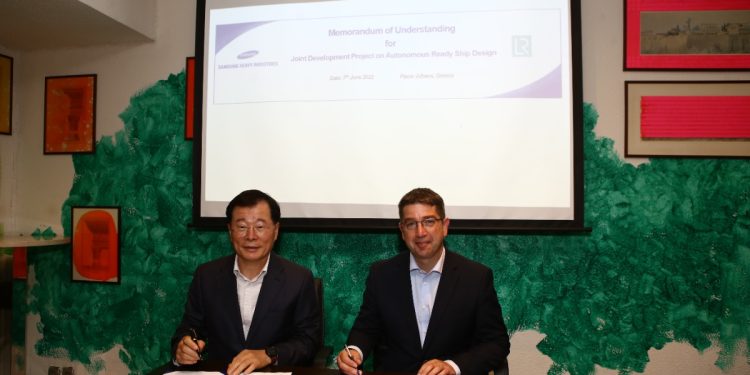 On June 7, during Posidonia, Lloyd’s Register (LR) and Samsung Heavy Industries (SHI) signed a Memorandum of Understanding (MOU) to develop an autonomous ready ship design to support maritime digitalisation and the growing demand for operational benefits of increased autonomy.

SAS (Samsung Autonomous Ship) is an autonomous navigation system which integrates current navigation equipment, such as ECDIS with TCS (Track Control System), RADAR, CONNING, and remote controlled BMS, with SHI’s new SVISION® system, using technology to eliminate human error which accounts for the majority of maritime accidents. SAS can be installed easily onto a ships system next to other software and evaluates collision risks around a vessel, whilst controlling the direction and speed of a ship in order to avoid objects.

LR’s role as part of the MOU will be to perform cooperative studies on autonomous systems in navigational autonomy, including commissioning procedures, guidelines for autonomous systems, verification, and validation activities. This will support SHI with the successful development and implementation of its autonomous system.

Nick Brown, LR Group CEO, said: “Leading our industry’s transformation starts with partnerships like this that support the growing demand for operational benefits, such as improved efficiency, reduced workloads for crew and higher safety performance via increased autonomy.”

This long and good partnership from early Digital Transformation to the Autonomous Ready Technology is concrete and expected to be a major key to the evolution of maritime industries.