Lessons learned: Securing shackles should be inspected for corrosion 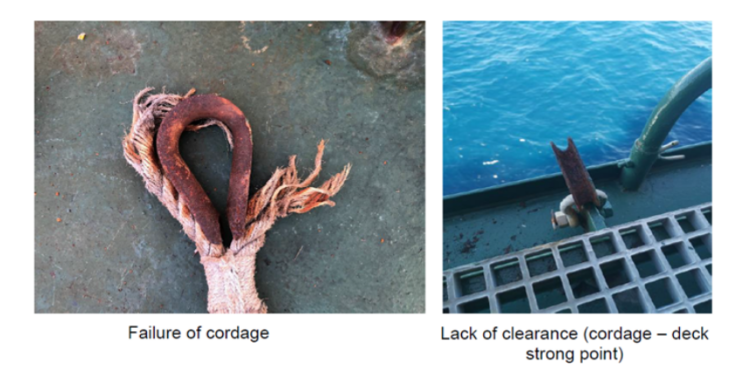 Following the latest version of IMCA’s Safety Flashes, it is described a case where during replacement of a lifeboat embarkation ladder, was identified a total failure of the natural fibre rope at the securing thimble.

Although natural fibre rope has properties that make it ideal for use in many marine applications, it is particularly susceptible to damage and loss of strength for several reasons, if it is not stowed and handled correctly.

Investigation found that the failure was caused through abrasion due to the back of the eye being in contact with the metal deck strong point. The anchor point was too small for the use of a shackle of enough size to provide clearance between the rope and deck strong point. The rope failed during removal of the ladder, indicating the extent of the wear.

A thorough inspection should be undertaken on a regular basis, and a visual check before and after use. The entire length of the ladder should be examined including all fixtures and fittings, considering the following points:

What is more, damage to or degradation of a natural fibre rope should be evaluated by an appropriately experienced crew member.

If deemed necessary, or if any doubt exists, the ladder should be removed from service, repaired or replaced. Factors which may require such action could include:

Shackles should be replaced if wear or corrosion has reduced the diameter of the crown or pin by more than 10%. Pad eyes should be checked for cracks and excessive wear and be replaced or repaired in accordance with Class requirements.