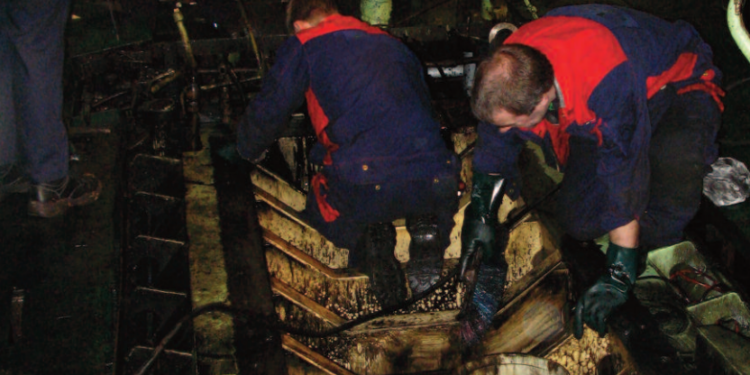 In its casebook of maritime accidents, Swedish Club notes a case where a vessel experienced serious damage to the main engine due to contamination.

A vessel was in ballast and at anchor, awaiting further instructions. After seven days the weather deteriorated and the vessel´s anchor dragged.

The anchor was heaved up and the vessel started to slow steam in the area. After about 24 hours the differential pressure alarm of the main engine duplex lubrication oil filter sounded in the engine control room.

The crew found aluminium and other metal inside the lubrication filter, and in the crankcase of the main engine, metal particles were found.

Serious damage to the main engine

The subsequent investigation alongside revealed that the metal particles found in the lubrication oil filters emanated from piston rings and piston skirts. Three pistons had almost seized.

The main engine, a sixcylinder medium speed type, had severe damage and the following parts had to be renewed: all cylinder liners, three complete pistons, piston rings on all cylinders, all main and connecting rod bearings.

In addition, the turbo charger had to be overhauled as the nozzle ring was broken. The complete lubrication system had to be carefully cleaned and flushed. The vessel was off hire for almost two weeks.

The pistons in cylinder units no.1 and 3 were melted down in certain areas and the skirt in no.4 was torn. Liners were scuffed as a result of the above.

Lubrication oil contaminated for some time

It was obvious that the engine had been operated on a high thermal load for a long time and that the turbocharger efficiency had been affected by fouling. The lubrication oil had actually been contaminated for some time.

There had been indications that something had gone wrong, for example it was written in the log book that the auto filter had been shooting up to 609 times a day.

In light of the situation, the vessel’s company stated that: