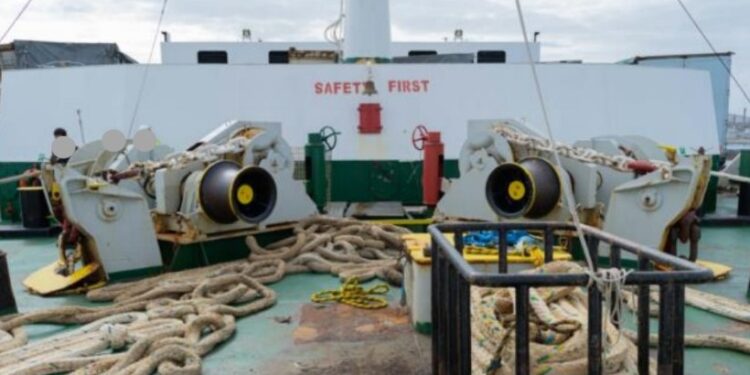 On 07 October 2019, a Passenger / RORO vessel was on a short coastal voyage from Cagliari, Sardegna to Porto Torres. The Vessel was experiencing North-westerly winds of Beaufort Force 8 and rough sea with a 5 m Northwesterly swell. Air temperature 21 °C. Visibility 8nm.

Master altered the vessel’s course to about 335°, with the intention of reducing the rolling motions. The bosun
reported to the bridge that the trestles and landing gear of two trailers on the forward-starboard side were
damaged and that consequently, these trailers had collapsed.

Master instructed the chief officer (C/O) and the bosun to take some of the deck ratings and secure the damaged
trailers with additional securing devices. The C/O and bosun established radio communication with the bridge
before proceeding for the operations with four AB’s (AB1, AB2, AB3 & AB4) and an OS.

The four AB’s and the OS waited in a sheltered area under the ramp on the port side while the C/O and bosun went to inspect the damaged trestles and landing gears.

While the C/O was surveying the area, he realised that the bosun was not around. The bosun apparently left the
cargo bay suddenly to inspect the anchor lashings on the forecastle deck forward of the deckhouse (that also acts as a wave breaker) without informing C/O.

While on the forecastle deck the bosun noted that the anchor lashings were loose and started walking back towards the ramp to call for assistance. At around this time a large wave washed over the vessels bow.

The bosun fell on deck but managed to get up and call for assistance to secure the anchors. AB1, AB2 & AB3
responded to the bosun and proceeded to the forecastle while AB4 and the OS remained in the sheltered area.
Another wave washed over the vessel’s bow and this time struck all four crew members, pushing them violently against the various structures and fittings on the forecastle deck.

After some time, the C/O reached the forecastle and found all three ABs lying on the forecastle deck. The bosun was nowhere in sight. AB3 called out to the C/O for help as his legs were injured. The C/O helped AB3 to a safer location and then went to check on the others.

The C/O found AB1 lying face down and unresponsive between the two windlasses. He checked for vital signs and, on not noticing any, called for AB4. The C/O and AB4 carried AB1 towards the accommodation entrance. C/O then noticed that the bosun and the other two ABs had managed to walk back.

The bosun and two Abs (AB 2 and AB3) suffered serious injuries, while AB1 suffered fatal injuries, because of this
occurrence. The autopsy conducted on AB1 revealed a broken neck, fractures in the left ribs, a fracture of the left humerus, and internal bleeding in the thoracic and abdominal regions. The broken neck was stated to have played an important role in the fatality of the AB, as this injury, by itself, would be severe enough to cause death within a very short span of time.

In addition to the fatality and the injuries suffered by the ship’s crew there was structural damage to the vessel,
damage to cargo securing equipment and damage to the cargo trailers.

The investigation results appear to indicate: