An Iranian oil tanker was hit, allegedly by missiles, in the Red Sea, off Saudi Arabia's coast on Friday, October 11, at around 5 am local time (02:00 GMT), as local Iranian media reported.

The tanker named 'Sabiti', owned by the state-run Iranian Oil company, is said to have been hit in the morning of Friday; Despite the news, the National Iranian Tanker Company stated that the blasts - one at 5am local time (02:00 GMT) and the other at 5:30am (02:30 GMT) - were "probably caused by missile strikes", as Al Jazeera reports.

Yet, the shipping company added that there was no fire onboard the ship, as well as no damage.

MarineTraffic in the meantime, tweeted a video showing that Sabiti had its AIS turned off. 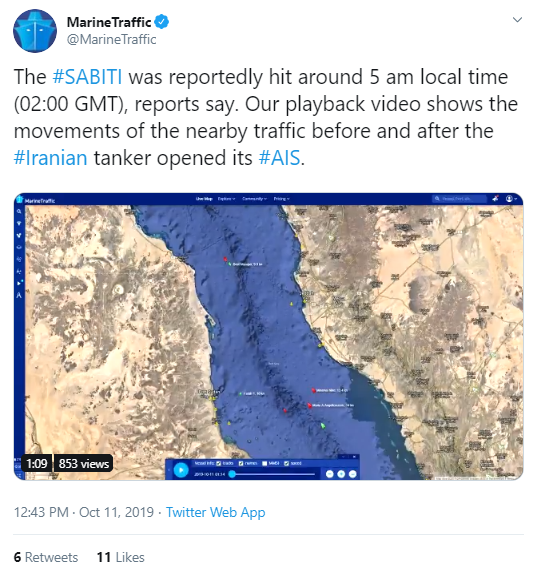 In addition, Iranian media have published images from the vessel after the attack, but the vessel shows no signs of damage; Yet, the signs of the hull are not in the frame.

Iran's foreign ministry confirmed the tanker was hit twice, with Foreign Ministry spokesman Abbas Mousavi commenting that those who are responsible for the attack will face the consequences for this dangerous adventure, along with the environmental pollution caused.

For the time being, there has been no claim of responsibility for the incident, which follows the tensions that have been taking place in the Gulf; The attacks in May and June in the area mark the increasing tension, which was stable up to now, as the Royal Navy had informed.