Investigation report: Tanker grounds due to not fully engineered ECDIS

Germany's Federal Bureau of Maritime Casualty Investigation (BSU) has published its investigation report on the grounding of the LPG tanker Pazifik off Indonesia on July 9, 2018, concluding that the incident was caused due to the not fully engineered ECDIS.

On July 9 2018, the LPG tanker Pazifik off Indonesia ran aground on a shoal between the islands of Komodo and Banta.

The ship was loaded with 18,000t of ammonia. Since only the forepeak and ballast tanks were damaged, no cargo escaped. After the incident, the vessel sailed to a shipyard in Singapore under its own steam escorted by a tug which had arrived  in the meantime.

During the vessel's repair, about 50m of the double bottom was renewed and the rudder was repaired. the latter was damaged when the ship refloated from the rocks during a minor collision with the tug.

Actions taken after the grounding

After strong vibrations were detected, the main engine was stopped manually from the bridge. the master sounded the general alarm after the grounding and instructed the crew to assemble. all crew members were accounted for and nobody was injured.

Actions taken by the owner

After the accident, the owner conducted an analysis of the incident and the cause.

The investigators found the ship to be in good condition and sufficiently manned with a qualified crew. Work hours and rest periods were adhered to, and no human error was detected.

On the contrary, the BSU states that the incident was caused due to the not fully engineered ECDIS, which is approved as a primary means of navigation.

The BSU compared the vessel's electronic charts with with other sources and found significant differences regarding the display of hazards at the site of the accident.

Learn more about the accident herebelow 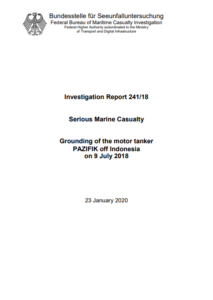