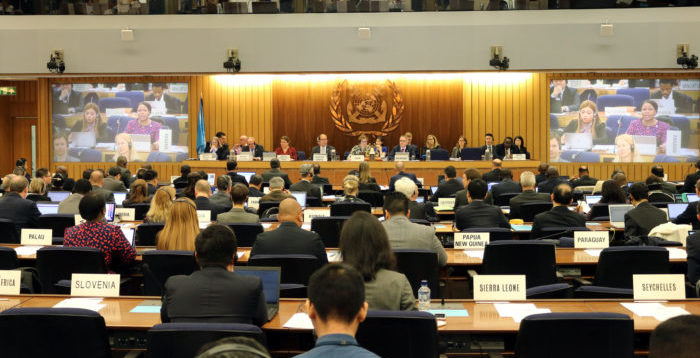 Electronic information exchange and data harmonization, work for a maritime single window and maritime corruption guidance were the key themes on the agenda of IMO’s FAL Committee, during its 43rd session on 8-12 April 2019.

The Committee approved the revised and updated IMO Compendium on Facilitation and Electronic Business, to support harmonization and standardization of electronic messages.

The Compendium includes a new standard IMO reference data set, which will be used as the basis for automated and digital systems for exchange of information when ships arrive at and depart from ports.

The information data set supports mandatory reporting formalities for ships, cargo and persons on board and can also be extended to support commercial businesses in international shipping. The Committee agreed that electronic access to the IMO Compendium should be provided through an IMO server.

The Compendium represents an important step forward towards the harmonization of data elements related to ships’ port calls, facilitating the exchange of information from machine to machine and the interconnection of single windows,

The mandatory requirement for national governments to introduce electronic information exchange between ships and ports came into effect from 8 April 2019, under the FAL Convention.

Work on the revised Compendium has been led by the World Customs Organization (WCO) with the collaboration of IMO, the UN Economic Commission for Europe (UNECE) and its subsidiary body UN/CEFACT (the global focal point for trade facilitation recommendations and electronic business standards) and ISO.

An IMO Expert Group on Data Harmonization was established, to meet twice a year and take care of the further development of the IMO Compendium, working towards harmonization with other fields beyond the FAL Convention.

The Committee noted information on the successful single window project implemented by Norway in Antigua and Barbuda with the assistance of the IMO Secretariat.

The Committee expressed appreciation to Norway for the in-kind and financial support to the project, and for the generous offer of making the source code developed for the system established in Antigua and Barbuda available to other interested Member States.

The Committee also encouraged interested Member States to contact the Secretariat  if they wished to obtain further details of the project and urged Governments and industry to provide funds for the implementation of the system in other countries.

Revised Guidelines for setting up a maritime single window were approved by the Committee.

The Committee also began work on developing guidelines for authentication, integrity and confidentiality of content for the purpose of exchange via maritime single window.

Cooperation of the FAL Committee with other IMO bodies

The Committee also invited other committees and sub-committees to approach the FAL Committee for advice and assistance in relation to electronic exchange of information.

The committee approved the text of the Explanatory Manual to the FAL Convention, which provides guidance to help Member States implement the Facilitation Convention more effectively.

Review and update of the annex to the FAL Convention continued

A correspondence group was established to continue work on the review and update of the FAL Convention annex.

The Committee agreed to review the Facilitation Convention as part of a regulatory scoping exercise for the use of maritime autonomous surface ships (MASS).

The exercise will follow the same process being used to scope other instruments, such as those under the purview of the Maritime Safety and Legal Committees.

The Committee decided to include a new output on its agenda, on “Guidance to address maritime corruption”, with a target completion year of 2021.

This followed discussion of a submission from several Member States and non-governmental organizations, which highlighted a Maritime Anti-Corruption Network (MACN) anonymous reporting mechanism that has collected over 25,000 incident reports up to October 2018.

The submission proposed the development of IMO Guidelines and/or a Code of Best Practice, with the aim of addressing the problem of maritime corruption and reducing the impact on global trade, improving port governance and reducing adverse consequences on seafarers.