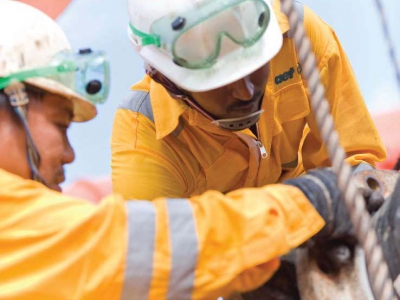 Global support for the International Labour Organization’s Maritime Labour Convention continues to increase, as the date it enters into force approaches. Currently, the ILO has registered ratifications of the Convention by 41 ILO member States* responsible for regulating conditions for seafarers on more than 75 per cent of the world’s gross tonnage of ships.

When theConvention, known as “MLC, 2006” comes into force on 20 August – effectively becoming binding in international law — it will establish minimum working and living standards for all seafarers on those ships. What’s more, it will also be an essential step toward ensuring fair competition and a level-playing field for quality owners of ships flying the flags of ratifying countries.

The MLC, 2006 was adopted by government, employer and worker representatives at a special ILO International Labour Conference, in February 2006, to provide international standards for the world’s first genuinely global industry. Widely known as the “seafarers’ bill of rights,” it is unique in its effect on both seafarers and quality ship owners.

The comprehensive Convention sets out in one place seafarers’ rights to decent conditions of work on almost every aspect of their working and living conditions including, among others, minimum age, employment agreements, hours of work or rest, payment of wages, paid annual leave, repatriation at the end of contract, onboard medical care, the use of licensed private recruitment and placement services, accommodation, food and catering, health and safety protection and accident prevention and seafarers’ complaint handling.

It was designed to be applicable globally, easy to understand, readily updatable and uniformly enforced and will become the “fourth pillar” of the international regulatory regime for quality shipping, complementing the key Conventions of the International Maritime Organization (IMO) dealing with safety and security of ships and protection of the marine environment.

“This Convention shows how tripartite dialogue and international cooperation can combine constructively for the most globalized of industries to concretely address the challenges to securing decent working and living conditions for seafarers, while simultaneously helping to ensure fair competition for ship owners,” says Cleopatra Doumbia-Henry, Director of the International Labour Standards Department of the ILO, which has steered the development, adoption and entry into force since the very beginning of the process.

The Convention was adopted with demanding entry into force requirements, to ensure that it would result in real change for seafarers and ship owners and avoid being seen as a “paper tiger.” The concern was to ensure that it had the strong backing of the maritime sector – especially flag States – before it came into force.

Under ILO practice, Conventions usually become binding under international law 12 months after countries register ratifications. To enter into force, the MLC, 2006 needed to register at least 30 ratifications by countries representing at least 33 per cent of the world’s gross shipping tonnage. (The tonnage requirement was met in 2009).

“Thus the speed and scope of ratifications is remarkable, given that the requirements for its entry into force were intentionally made the most stringent of any ILO Convention,” Dr. Doumbia-Henry says.

As the pace of ratification increases, the maritime industry is also actively implementing the Convention, often well ahead of government action. It is foreseeable that the Convention will eventually receive nearly universal ratification from relevant ILO Members.

The Convention mandates that commercially operated ships of 500 gross tonnage or over and governed by its provisions will, if they operate on international voyages, be required to carry, among other things, two specific documents: a Maritime Labour Certificate (MLC) and a Declaration of Maritime Labour Compliance (DMLC) providing prima facie evidence that the ships are in compliance with the requirements of the Convention.

These two documents will be subject to inspection when ships enter the ports of other countries that have ratified the Convention. In addition, ships flying the flag of countries that have not ratified the Convention will also be subject to inspection with respect to working and living conditions for seafarers when they enter ports of countries where it is in force. This “no more favourable treatment” approach, is an important aspect to help ensure fair competition for ship-owners that comply with the Convention.

In addition, countries that ratify the Convention after the first 30 that initially brought it into force, will come under its provisions within one year of their ratification date.

An international standard for a global industry

The MLC, 2006 applies to a wide range of ships operating on international and national or domestic voyages. Exceptions include those navigating exclusively in inland waters or waters within, closely adjacent to sheltered waters or areas where port regulations apply; those engaged in fishing or similar pursuits; and ships of traditional build such as dhows and junks and warships or naval auxiliaries.

It also contains important new compliance and enforcement components based on flag State inspection and for port State control. The ILO has developed a number of resources such as Guidelines for flag State inspections and for port State control as well as workshops to help train inspectors and to assist national legal counsel and officials involved with ratification and national legal implementation. TheMaritime Labour Academy at the ILO’s International Training Centre (ITC) in Turin, Italy, offers a comprehensive range of training activities under the MLC, 2006.

*Currently, the ILO has received 45 instruments of ratification. Registration of four ratifications are pending receipt of social security information.

Learn more about MLC by clicking at the following articles

Maritime Conventions revised by the MLC