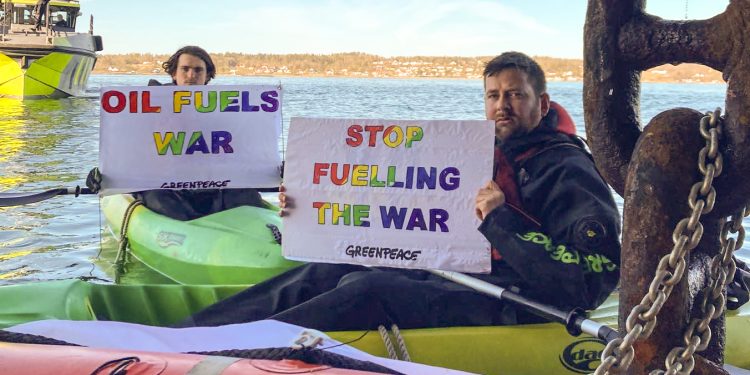 Greenpeace Nordic activists are blocking the oil tanker Ust Luga, and preventing it from offloading Russian oil into the port.

The action takes place in the Oslo Fjord, in the Slagentangen oil port owned by Esso, a Norwegian subsidiary of US-based ExxonMobil. The activists are calling on the Norwegian government to ban the import of Russian fossil fuels and demanding that Esso cancel its contracts to buy fossil fuel from Russia in this time of war.

The activists have chained themselves to the anchor chain to prevent the Ust Luga from going to pier and offloading. Activists in kayaks display banners that read “Oil fuels war”, “Stop fuelling the war” and “No war”.

“Oil is not only at the root of the climate crisis, but also of wars and conflicts. I am shocked that Norway operates as a free port for Russian oil, which we know finances Putin’s warfare.

Previously, Greenpeace Norway has sent strong-worded letters to both Esso and the Norwegian government, demanding an end to all Russian oil and gas.

Greenpeace’s goal is to ensure the ability of the earth to nurture life in all its diversity. We use peaceful protest and creative confrontation to expose global environmental problems and promote solutions that are essential for a green and peaceful future