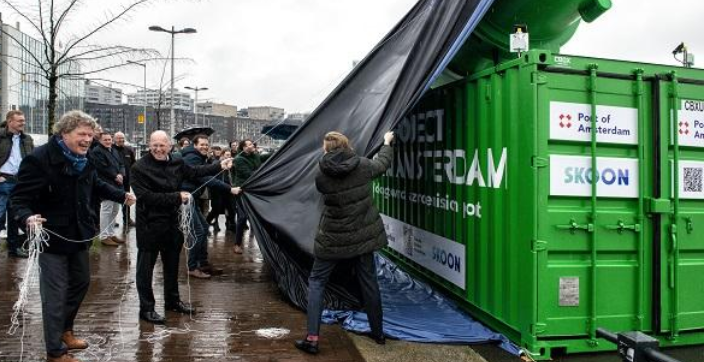 In fact, Dutch company Skoon Energy operates a platform that enables mobile battery sharing to optimize the economics for battery owners and user.

This concept of battery sharing facilitates all services for energy users who are in temporary need of electricity.

The development comes to fill the gap of the current grid connections, that do not provide sufficient capacity to meet the vessels’ power demand in light of the increased river cruise calls in April and May, brought by the flower field season.

Specifically, some of the current grid connections run diesel generators to generate power whilst moored. This leads to noise pollution and harmful emissions in the centre of Amsterdam.

The floating battery is silent and supplies green energy. The battery will be charged from renewable energy sources, such as Windpark Ruigoord, solar panels from rooftops in the port area and energy from biomass by waste-to-energy company AEB.

As informed, the floating battery will be on the barge for six months. It will support river cruise vessels two weeks per month.

During the other two weeks, the battery will be utilized by various projects in Amsterdam, such as construction projects, film sets or events that often need temporary energy sources and traditionally rely on diesel generators.

Zoev City is the partner involved in transporting the battery through the canals, with its full-electric vessels.

We have started this project with Skoon, as it is in line with our ambition of creating partnerships that will help us become a zero-emission Port. Together with Skoon and Zoev City, the floating battery will also be deployed in the city centre of Amsterdam, when it is not needed to deliver power to river cruise vessels at berth,