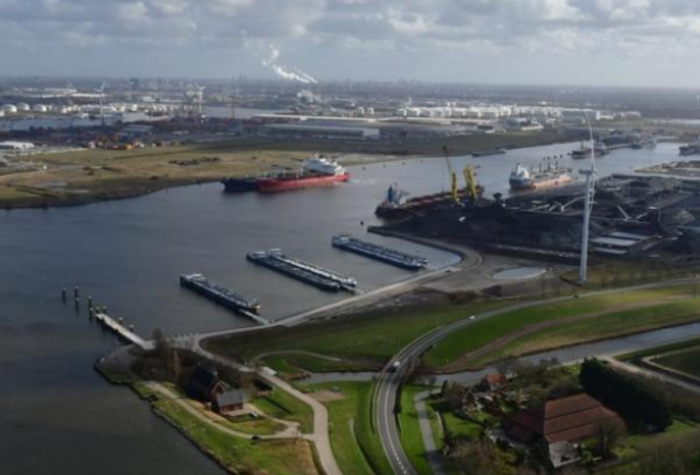 Above image is used for illustration purposes only / Credit: Port of Amsterdam

First hydrogen station to be built at Port of Amsterdam

Holthausen Energy Points (HEP) is to build the first hydrogen station at the Port of Amsterdam, starting from 2020. Truck drivers and motorists will be able to refuel at the station 24 hours a day, seven days a week.

Work on the construction of the hydrogen station on Australiëhavenweg is expected to begin in spring 2020.

To promote sustainable production of hydrogen at the station, the municipality of Amsterdam has issued a one-off grant of € 0.5 million.

The municipality is also planning to install hydrogen fuel cell engines in its refuse vehicles. The first six of these refuse vehicles will be on the streets in 2020.

Hydrogen-powered vehicles do not emit air pollutants such as nitrogen and particulate matter and contribute to clean air. And what’s more, hydrogen produced with green power is also climate neutral. So the hydrogen station will help the city and the port achieve their sustainability targets. We want the municipal fleet to be emission free by 2030. Hydrogen is the perfect solution for our heavy-duty vehicles,

The hydrogen station will also refill hydrogen cylinders, enabling local businesses to quickly and easily obtain hydrogen for their (construction) generators, and hoisting and lifting equipment such as forklifts.

Hydrogen is considered a promising solution to shipping decarbonization. Port of Amsterdam sees hydrogen as having an important role to play as an energy carrier that will support the achievement of climate targets.

Together with specialty chemicals company Nouryon and Tata Steel, the Port of Amsterdam is participating in H2ermes, a project that will enable large-scale production of green hydrogen with North Sea wind power.

The port is also building a new vessel that will be powered by hydrogen fuel cells.

The municipality of Amsterdam is a partner in REVIVE (REfuse Vehicle Innovation and Validation in Europe). One of the objectives of this European project is to demonstrate that trucks with a fuel cell range extender are an effective emission-free alternative to conventional heavy-duty vehicles.

The project has received funding from the EU’s Fuel Cells and Hydrogen 2 Joint Undertaking (FCH JU).

Holthausen Energy Points received a grant for the construction of the hydrogen station under the DKTI-Transport scheme, which invites companies to demonstrate innovation in climate technologies and transport.

There are clear advantages to using hydrogen as a fuel source. Heavy-duty vehicles are emission free and have a greater radius of action. They also weigh less and can refuel at filling stations,

In late November, seven major companies of the energy and maritime sector signed an agreement in order to develop new projects that can offer to the the production, transport and storage of hydrogen in Belgium.