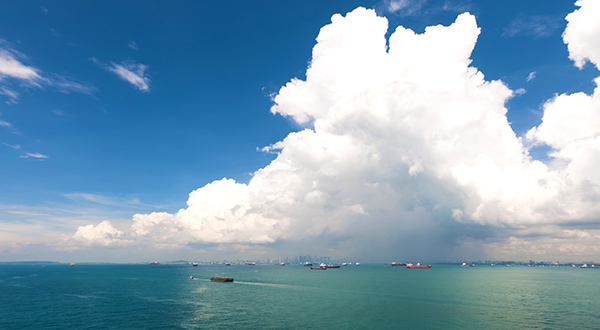 The European Union announced that is forging ever stronger green and blue links to Indonesia, the largest archipelagic country in the world, as both recognize that the success of the ‘blue’, sustainable ocean economy depends on keeping oceans healthy.

“Our oceans and landscapes are our future. We depend on them for our food, clean air, materials, our income, and well-being. Their responsible management is key to prevent extinctions of species, hunger, mass migrations and extreme climatic events in the twin battles for climate and biodiversity” said EU.

In particular, EU noted that there are huge challenges, as in less than 10 years, oceans could contain one tonne of plastic for every three tonnes of fish. Illegal, unreported and unregulated fishing (IUU) is worth up to 10 billion euros a year. On this context, European Union is taking the lead to protect oceans and improve ocean governance around the globe. In November, they launched an initiative to make sure that the world’s oceans are managed better and more sustainably.

EU explained that Indonesia is already a major ally in this push for healthy and productive oceans.

“We are also natural partners, as the EU is the largest market for fish and sea food in the world and Indonesia the second largest producer (for both fish and plastic debris ending as ocean litter). The European Union follows a zero tolerance policy towards illegal fishing. Since President Widodo has made fighting IUU a priority of its office, Indonesia has reformed its fisheries governance and taken measures to stamp out illegal fishing in its waters. Action is as well taken to extend producers responsibility and reduce waste, thanks to the efforts of front-runners among companies and NGOs. In addition, Indonesia is one of 91 countries to apply the EU catch certification scheme, which allows fisheries products traded with the European Union to be traced all the way from the fishing net to the plate. Responsible buyers, investors and suppliers can only work together, if they are to be genuinely effective” referred EU.

Furthermore, EU announced that is especially proud to host the fourth “Our Ocean” conference in October 2017, where ministers, business leaders and other ocean champions from around the world will focus on action to protect fragile ocean areas, make fisheries more sustainable, tackle marine pollution, and manage the many impacts of climate change. “Ocean 2018” will be hosted by Indonesia.

European Union and Indonesia are also working together to ensure the sustainability of ‘green’ land-based resources. Indonesia’s forest landscapes are unique biodiversity hotspots, they provide income for rural communities, and shelter all from extreme climatic events. That makes illegal logging or unsustainable palm oil production critically important challenges, as the consequences are social, economic, and environmental. EU achieved in 2016 an important milestone in this area, using trade to promote legality. Last November the first shipment of Indonesian licensed woods departed to Europe, making Indonesia the first country in the world to export such timber to the EU. In 2002, just 20% of Indonesia’s timber was legal. Today, all of Indonesia’s timber exports are from independently audited factories and forests.

EU underlined that feel duty to step up cooperation against global wildlife trafficking (worth almost 20 billion euros a year, second only to narcotics and human trafficking), targeting the organised criminal groups that control this illegal trade and looking at ways of strengthening enforcement and reducing demand for illegal products. Moreover, they suggested that a more circular economy will also help reduce carbon emissions, as everyone committed to in ratifying the Paris Climate Agreement.

Finally, EU marked that Indonesia is a valued partner in deepening blue’ and ‘green’ ties in the following years and that, together, they will also launch a new EU-Indonesia working group on Climate and Environment.