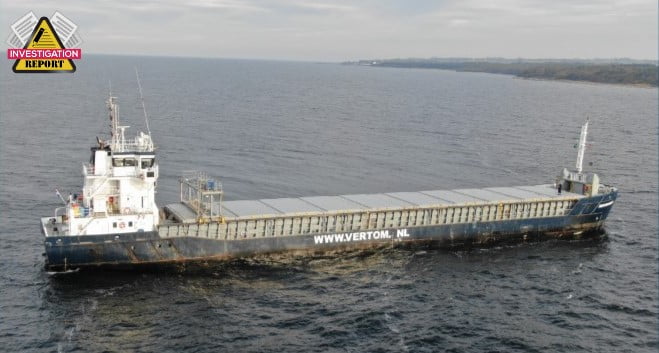 The Danish Maritime Accident Investigation Board (DMAIB) published its report on the grounding of Beaumaiden, just off the Baltic Sea island of Bornholm last year.

At noon time, the master was relieved on the navigational bridge by the 3rd officer. After the handover, he went to his cabin, watched a movie and took a nap.

He then woke up at 1700 and went to the messroom to have dinner. Afterwards he went to his cabin to watch a movie while he drank a glass of wine.

Just before 2000 the master went to the bridge to relieve the chief officer. They had a short conversation, and the watch was handed over.

The chief officer did not notice anything unusual about the master nor did he notice that the master had been drinking wine.

By now, it was dark, and the master was alone on the bridge, because it was not common practise to have an able seaman (AB) on duty during night-time to keep lookout

The ship proceeded in Kadetrenden on course 062°, and the next course change was to be made near Bornholm 4-5 hours later. There was little traffic, and the weather was good. During the watch the master sat in the navigational chair and made several phone calls to friends while he listened to music.

After a while he went to his cabin to fetch his wine glass. He filled it with wine and brought it to the bridge. The ship kept a steady course and speed, and there was no oncoming or crossing traffic for the master to take into consideration.

A few hours into the watch, the master had to go to the lavatory, but he knew that the toilet on the bridge did not flush properly, so he had to use the toilet in his cabin.

After having made a phone call to a friend at home where nobody answered, he went to his cabin three decks below. Whilst in his cabin he felt tired and laid down on the bed to rest. He then fell asleep.

At 0255, MAS Denmark contacted Maritime Operations Center (MOC) and requested them to scramble a rescue vessel to intercept Beaumaiden, because it was on a course heading directly towards the shores of Bornholm.

In the following minutes, via the coastal radio station Lyngby Radio (LYRA), MAS Denmark tried to contact the ship by VHF, VHF DSC and by phone without getting any response from the ship. The Danish Police on Bornholm was contacted and advised that Beaumaiden was about to run aground on Bornholm.

On Beaumaiden the chief engineer was asleep in his cabin when he was suddenly awoken by the ship violently vibrating. He hurried out of his cabin and out on the aft deck where he saw the wake from the propeller.

From the aft deck he went into the accommodation and ran up the stairs to the navigational bridge. When he opened the door to the bridge, he heard loud music, noise from numerous alarms and found the bridge empty.

He rushed to the conning station and put the propeller pitch to zero, but he did not know how to silence the alerts from the various instrumentation, or how to stop the music.

In the meantime, he went to the engine room to check for water ingress and switch from power supply from the main engine shaft generator to the auxiliary engine generator.

The investigation established that the ship’s OOW left the navigational bridge and went to use the toilet in his cabin.

Once there he fell asleep and left the bridge unmanned for a period of approximately four hours prior to the grounding.

The OOW’s alcohol consumption might have contributed to the feeling of sleepiness and his proneness to falling asleep and not waking up during the grounding.

It is likely that the influence of alcohol impaired his judgement and contributed to the decision to leave the bridge and to rest on the bed whilst in his cabin.

“There can be several reasons for the navigational bridge to become unmanned, e.g. the OOW can fall asleep, become ill or lose consciousness, etc., which can have adverse consequences, unless safeguards are in place,” said DMAIB.

On Beaumaiden those safeguards were not effective for various reasons: