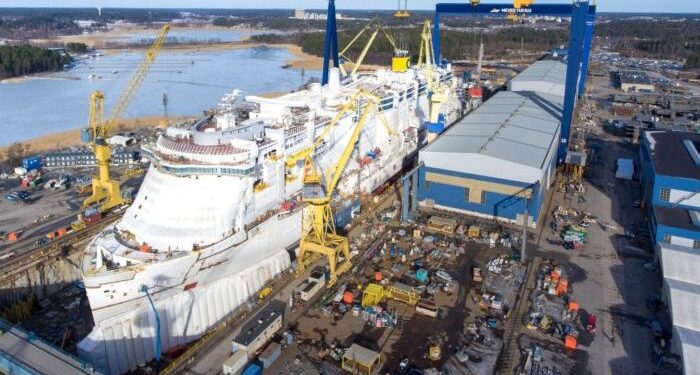 Costa Smeralda was floated out on 15 March at Meyer Turku / Credit: Meyer Turku

Shipbuilder Meyer Turku informed that Costa Smeralda was floated out with traditional ceremonies at the Meyer Turku shipyard, on March 15. The float-out of Costa Smeralda, an LNG fueled 180 000 GT cruise ship, signals the start of the final stage of construction for the ship.

The ceremony marks the outfitting phase in the ship’s construction. It will be finalized at the outfitting pier of Meyer Turku and be ready for delivery for Costa Cruises in October 2019.

Costa Smeralda will be the first LNG fueled cruise ship in the Costa fleet and one of the first ones to sail. LNG can limit all small-particle and SOx emissions, as well as reduce NOx and CO2 emissions of the ship.

Speaking about the floating out of the ship, Neil Palomba, President of Costa Cruises, stated that the ship is an innovation towards setting new standards for the shipping industry.

The newbuild will feature a length of 337 meters and a width of 42 meters.

Delivery of a second ship, the twin to Costa Smeralda, also being built by Meyer-Turku, is planned for 2021.

Costa Smeralda and its twin ship are part of an expansion plan for the Costa Group fleet under which seven new ships will be delivered by 2023, for a total investment of over 6 billion euros.