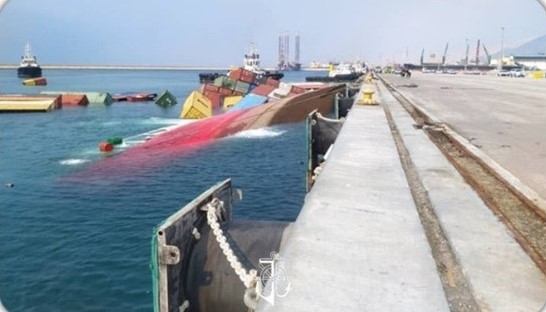 A Tanzanian cargo ship sank on January 24, in a jetty in the southern Iranian port of Assaluyeh, as state media reported.

More specifically, the official IRNA news agency said that the vessel called “Anil” capsized as the containers onboard were configured incorrectly at the port’s dock No. 9.

After the incident, rescue teams transferred the ship’s crew to safety.

This morning on the 24th jan , the ANIL container ship under the flag of Tanzania sank in Berth 9 of Pars Asaluye service port. In iran. 🚢🇮🇷🙏🇮🇳 pic.twitter.com/Txk19mnh0r

Photos that circulated after the incident, show the vessel sank on its side, with containers floating around it.

In a similar incident at the beginning of January, a containership listed hard over at a pier at Mundra International Container Terminal, dropping a large quantity of cargo over the side.

According to information, during cargo operations, the vessel Sea Xpress listed hard over to port, throwing about 20 containers into the water.

What is more, commenting on the incident, Broker Prevailing Shipping & Logistics India reported that the incident was probably caused by improper ballasting and the outboard orientation of the vessel’s cranes.