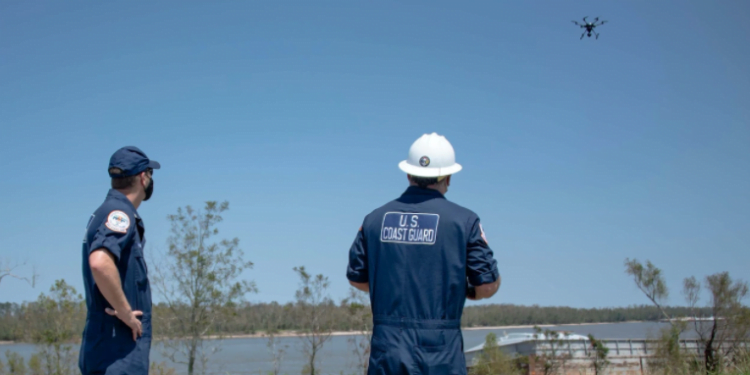 The Coast Guard has a variety of drones at its disposal, both cutter-based and on land, while their use keeps increasing after hurricanes and severe weather events.

At the top end, the Coast Guard uses the General Atomics MQ-9 Predator in partnership with U.S. Customs and Border Protection to conduct surveillance for drug interdiction, migrant traffic, and other nefarious activities along the southern borders. These long- range drones, which are land-based, weigh in at 10,500 pounds and can travel at speeds of up to 276 mph.

In addition to using UAS for routine inspections, the service’s civil engineering units have also brought in drones to identify storm damage in and around Coast Guard and strategic coastal facilities

While airplane surveillance and helicopter rescues may be more visible, a growing fleet of unmanned aircraft is frequently taking the lead in post-storm damage assessment and cleanup. And they’re not only doing it more safely, but usually at a fraction of the cost.

“Drones can be used to inspect a variety of sites and do it safer. They often eliminate the need to send manned Coast Guard aircraft and crews up in precarious weather for missions outside of search and rescue. After Hurricane Ida, the Coast Guard’s Civil Engineering Unit used drones to assess damage in and around service facilities”.

Due to image quality and the accuracy of GPS, software can be used to extract exact measurements from the imagery to determine material needed for repairs. Before, the only way to do this was to have service members or contractors physically climb onto roofs and towers to measure the structures manually.

As explained, aids to navigation (ATON) are the buoys and channel markers the shipping industry relies on to navigate in and out of ports. They often get dislodged during a storm surge, and cause delays or hazards in the global supply chain.

“Previously, the only way to address the issue was for Coast Guard ships known as “buoy tenders” to go from buoy to buoy to verify each was in its proper position relative to the channel. Now a pilot can quickly launch a short-range drone from an underway vessel and record the position of several buoys in one sortie. This enables the vessel to continue its patrol of the shipping channel, only stopping if the drone finds a buoy off station or damaged”.

Despite the advantages UAS offer, they will never be able to replace manned assets completely. Drones can’t implement on scene decisions such as hoisting during a rescue mission, and even large logistics haulers will be hard to replace because of the nature of their missions. But using a UAS to bridge the gap is incredibly helpful – especially in search and rescue, according to Lt. Cmdr. Dominic Bucciarelli, program manager for the short range UAS.

“The search part is what wears down crews,” he said. “If (drones) can take that out of the equation and make it into a ‘point to point’ mission, we’ve increased our manned crews’ safety exponentially.”