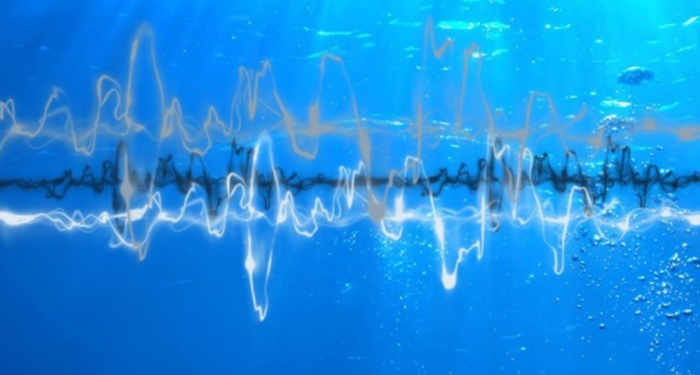 The ocean is full with sound, with many animals depending on it to survive. By using sound, many marine organisms can communicate underwater and understand information about their environment. However, underwater noise deriving from human activity, produces sounds that interfere with the ability of marine animals to hear the natural sounds in the ocean, concluding on a major and often deadly menace to ocean wildlife.

Cetaceans such as whales are using mostly sound to survive in their environment. Through reflected echoes cetaceans are navigating their way through sea, while they also communicate with other animals, which are kilometres away.

However, in recent years, human activities such as shipping, recreational boating, and offshore exploration have increased in the oceans. These activities make intense noise, which travels long distances underwater, changing ocean noise levels.

The main cause of the increase in underwater noise is shipping traffic. Today, 90% of goods are transported by ships. These ships are generating an acoustic “fog” that covers natural sounds and produce low-frequency sound between 10 Hz and 1 kHz that can spread over huge distances, which is the most common source of ocean noise.

According to studies, underwater noise from commercial ships may have both short and long-term negative consequences on marine life, especially marine mammals. Since ships routinely cross international boundaries, management of such noise requires a coordinated international response.

This is confirmed by studies as well. Namely, according to a study called ‘Impacts of anthropogenic noise on marine life’, a rapid growth of ocean noise research since 1940 has been noticed. Anthropogenic underwater noise is now recognized as a world-wide problem, and a number of studies have presented a broad range of negative effects in a variety of taxa.

Special consideration is given to underwater noise from shipping, which is increasingly recognized as a significant pollutant, which in fact has the potential to impact marine ecosystems worldwide.

Seismic ships are used for oil and gas exploration below the seabed. Their sounds can infiltrate into hundreds of kilometres into the ocean floor. Namely, these ships’s airguns emit sound every ten to fifteen seconds, often for a whole. In addition, hydrophones are also used to analyze the sound that reflects back to the sea surface.

Military vessels are using sonars during exercises and routine activities to search for objects such as enemy submarines. These sonars emit sound pulses of more than 100 seconds at a time for hours on end.

Explosives are detonated in the ocean by the military, for demolition purposes, or for testing equipment. They cause extremely high noise levels across a wide frequency range and are characterised by rapid rise times.

#1 The health of cetaceans is deteriorating

Shipping noise affects greatly marine animals. Due to the ever increase noise from shipping traffic in recent decades, cetaceans’ health is getting worse. Underwater noise is increasing the stress levels, which in their turn cause problems to their breeding success.

In addition, the journal Biology Letters has published a recent survey, according to which dolphins need to make even louder sounds in order to communicate with each other.

This change in dolphins’ sounds is reducing the information included in these sounds and impact their effective communication.

Due to the increased use of sonars underneath the surface, cetaceans are changing their diving behaviors because they are panicking. This causes decompression symptoms affecting vital organs, which can lead to death.

Some animals that are severely injured or even dead are washing up in the shores, however the majority of these animals die unnoticed in the open sea and sink.

Seismic vessels are using airguns which can reach hundreds of kilometers inside the sea. When these sounds strike in the bottom and go back to the ship’s sonars, it degrades the marine environment, forcing some marine life to leave their habitat.

All of these impacts have the potential to destroy the cetaceans’ habitat and as a consequence their life.

Mitigating the impacts of underwater noise

Without a doubt, underwater noise is very harmful to the marine environment. The positive is that there are a number of initiatives that aim to reverse this situation and protect the affected animals.

The ECHO Program started the first-of-its-kind voluntary Vessel Slowdown Trial through Haro Strait to study the relationship between slower ship speed, underwater noise levels, and effects on the endangered southern resident killer whales in one of their key feeding areas.

During the trial period, operators of cargo ships were asked to navigate over listening stations (hydrophones) and reduce their speed to 11 knots.

The results showed that reducing vessel speeds is an effective way of reducing the underwater as well as the total underwater noise in nearby habitats.

For this initiative, the Canadian port was one of the short-listed nominees at the port awards category of the last GREEN4SEA Awards.

The Guidelines include the following, amongst others:

The nineteenth meeting of the UN Informal Consultative Process on Oceans and the Law of the Sea (ICP 19) took place from 18 to 22 of June, under the theme “Anthropogenic underwater noise.”

The aim of ICP 10 is to protect marine life from ship noise and the items on its agenda regarded:

What is more, under the UN Sustainable Development Goal 14, the problem is put on the agenda to adopt measures as part of the sustainably use of the oceans, seas and marine resources. In this regard, shipping industry’s work includes reduction of underwater noise from ships and adopting measures to avoid collisions between ships and marine mammals.

The Australian Government has funded a research to analyze the shipping noise and its potential impact on whales and other marine animals.

What is more, recordings of individual ships will be carried out at ports in Sydney, Fremantle and Gladstone to gain accurate sound measurements of the different types of large ships.

The Government of Canada announced a $26.6 million in funding from the Oceans Protection Plan for research to understand noise pressures on marine mammals.

The research will focus on understanding the impact of shipping-related noise on whales, specifically the endangered North Atlantic Right Whale, Southern Resident Killer Whale and the St. Lawrence Estuary Beluga.

Researchers establish current ambient underwater noise levels in these whales’ habitat, which will help inform measures aimed at reducing the levels, as well as evaluating their effectiveness.

Burau Veritas (BV) launched a voluntary notation in 2014 to help ship operators and shipbuilders monitor and cut underwater-radiated noise. In July, BV updated its rules, adding the notation to the vessel.

RINA Services has also published a voluntary notation, regarding commercial vessels that have mitigated underwater noise. The notation was developed for vessel operators which sail in sensitive marine areas and who wish to showcase that they have taken measures to mitigate the impact of their vessels.

Underwater noise is a serious problem, affecting a large number of marine animals. Long-term measurements of ocean ambient sound indicate that low-frequency anthropogenic noise has increased, primarily due to commercial shipping. A variety of marine animals are known to be affected by anthropogenic noise in the ocean, and long-term impacts are not yet known. However, the fact that this problem is human-made, highlights that it is in our hands to change it and provide a safe marine environment.