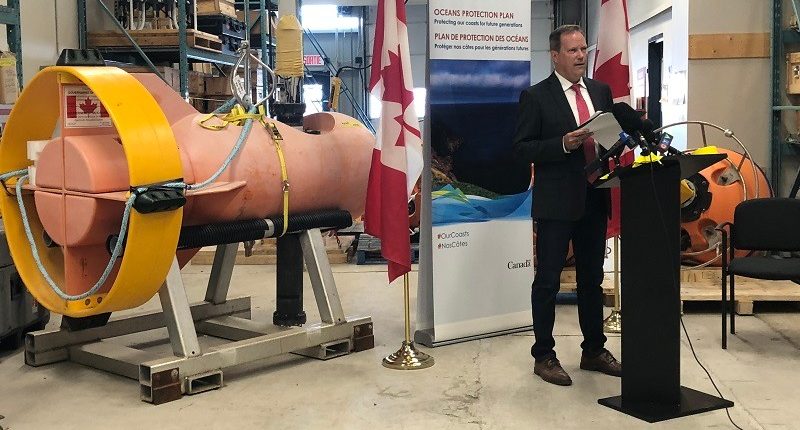 As part of its efforts to secure a sustainable marine environment for the years to come, the Government of Canada announced a $26.6 million in funding from the Oceans Protection Plan for research to help better understand noise pressures on marine mammals.

Namely, on 20 July, Darren Fisher, Member of Parliament for Dartmouth — Cole Harbour, on behalf of the Honourable Jonathan Wilkinson, Minister of Fisheries, Oceans and the Canadian Coast Guard, announced the funding for the research, which, under the Marine Environmental Quality initiative, will help the Government of Canada identify how to reduce the impacts of noise stressors on whales and other marine species.

The initial focus will be to better understand the impact of shipping-related noise on whales, specifically the endangered North Atlantic Right Whale, Southern Resident Killer Whale and the St. Lawrence Estuary Beluga. Researchers will work on establishing current ambient underwater noise levels in these whales’ habitat, which will help inform measures aimed at reducing the levels, as well as evaluating their effectiveness.

Fisheries and Oceans Canada has already begun working with various partners to carry out this important research, including projects previously announced in March for the Pacific coast.

Our coastal regions are home to important marine species and habitats that play an important role in our country’s economy. Today’s investment is helping restore funding for ocean and freshwater science, which will ultimately make our waters healthier for the benefit of all Canadians and future generations,

The $1.5 billion Oceans Protection Plan is the largest investment ever made that is ensuring our coasts are healthier, safer and better protected. The initiative includes funding of $635,000 to Dalhousie University to support monitoring efforts of North Atlantic Right Whales in the Gulf of the St. Lawrence and in Roseway Basin, an area off southern Nova Scotia. The university will deploy underwater acoustic gliders to detect the presence of the whales and how they move through the areas.

Dalhousie University also received $22,000 to support the development of an ocean noise model capable of predicting the natural or “normal” underwater noise levels in waters inhabited by whales. This modeling work will help us better understand and quantify the noise levels that human activities are contributing to oceans.

Funding of $3.1 million was previously announced for four research projects to study the impacts of underwater noise on the Pacific coast. Partners include Ocean Wise, the University of British Columbia, the University of Victoria, and the Vancouver Fraser Port Authority.

Under Budget 2018, the Government announced additional funding of $167.4 million for whale initiatives will help protect and support the recovery of the Southern Resident Killer Whale, the North Atlantic right whale, and the St. Lawrence Estuary beluga whale through comprehensive actions tailored to address the unique combinations of threats.

On the same context, in August, Canada introduced new rules for whale watching and approaching marine mammals, which will provide a minimum approach distance of 100 metres for most whales, dolphins and porpoises to legally protect these animals from human disturbances.