During the inaugural Hellenic American Maritime Forum in Athens, Dr. Khorshed Alam, COO, Viswa Group, talked about the sulphur 2020 options and alternatives, explaining how these solutions can be implemented, as well as what challenges are possible to occur.

A misconception about scrubbers is that they are very expensive, but the price has gone down like any other technology. Regarding the return of investment, it is pretty low at 1.2 to 1.4 years. Of course it depends on what cost data we put at the equation for the low sulphur fuel and the high sulphur. Banks can finance scrubbers or ship owners may seek for an alternative, such as LNG as a fuel. I used to support LNG as a viable choice, but for one reason or another it seems to me far behind of what was predicted. However, it may dominate closer to 2030.

In a possible scenario, if the fuel you burn breaches the status quo, you will have massive problems. Multiple fuels will bring uncertainty. Considering the Houston crisis, we could have many of these crises with the IMO 2020 compliant fuels. If we look at how compliant fuel is going to disrupt the heavy fuel supply trade: right now around 200 million metric tons of bunker trading is taking place and the newest, to be around 30 million metric tons, will remain in scrubbing while further 25 million will be for non-compliance. In addition, initially NGO is going to take over quite a bit of the remaining and the compliant fuel will be the best. It is almost 50/50. I think a prudent operator would choose the distillate instead of compliant fuel at beginning.

We have done a number of tests, which showed that the viscosity range is as low as 18 CST, some is 302. In addition, CAT fines levels in some regions are high. Regarding the problems we may have, low sulphur fuels will come from different regions, and the issues may be the stability of the fuel, the compatibility, there will be cold flow problems, CAT fines, flashpoint, CCI and viscosity.

Let’s take for example sulphur. We got used to high sulphur fuel and then we started feeding TBN as well as more CLO. High sulphur fuel let us have a shorter running period, from 5 days for diesel oil to less than a day with HFO. Now, all of a sudden came LSFO. No corrosion is positive, but should we have the low CLO feed, should we have no TBN CLO. The answer is not there.

We are giving a solution for low sulphur fuel with low TBM and high TBM. Low TBM detergents is not there, it is going to fire up engine. Every four days you will have to change to high TBN. Are you ready to take this kind of solution?

Then of course another one is a longer running period, but it is not enough. No sulphur no corrosion, slow steaming is more conducive for the corrosion. What I am saying is that it is not so straightforward, there are multi-objective criteria. Having said that, the scariest part is that we do not have adequate experience for that. Neither the engine maker nor others.

Another problem is that the design of the engines are based on high sulphur fuel, beginning from the injector design, the orientation of the nozzles, the size of the holes, the pressure, viscosity, all were based on high sulphur fuel. Optimization has two variables. One is the penetration, the other one is atomization. With that there will be poor combustion, resulting into high specific fuel consumption.

Moreover, engine makers were saying that it is between 12 to 18 CST, now they are saying it is between 2 to 20 CST, but there will be water efficiency loss.

Purifier is going to be affected because of the viscosity. With low viscosity the efficiency will be better and viscosity alone will give some good things. If the temperature goes up, viscosity goes down and the separation of the CAT fine is far better.

Distillate fuel will also have its own problems. There will be lubricity problems, micro-bled contamination and high TAN corrosion, as well as cold flow. With 2 CSTA range, the engines are not designed for that and engine makers are not doing anything on this.

As for cold flow in distillate fuels, it is going to happen. You will have to test the fuel for filter planning point, so be prepared for that. The bacteria problem can be there for quite some time. Distillate fuels can be full of microbes and operators will have to shift first oil.

When ordering the fuel oil you must have a plan of how to separate the new oil, how to avoid mixing and varying viscosity, BN LO and CLO.For the fuel choice we recommend the status quo with an open loop scrubber. Then, do not hedge in 2020. Consider hedging only in 2021.

Distillates have their own set of problems –

Concluding, we recommend ship owners who choose scrubbers, to go for Open Loop which is preferred by 94% of the companies. If you go for scrubbers, don’t hedge in 2020. Enjoy the benefits of low prices of HSFO and consider hedging only after mid-2021. Also, do not jump to choose new fuels till their performance in engine, quality during long storage, cold  flow properties, compatibility and stability problems are well established. Certainly, it is not a clever idea to experiment with new unknown fuels. In the prevailing confusion and claims and counterclaims, most who do not have a scrubber will go for the fuel they know – MGO/MDO. In any case the price of the new fuel is only $30 to $50 per MT cheaper than MGO!

Above text is an edited version of Dr. Khorshed Alam’s presentation during the 2019 Hellenic American Maritime Forum. 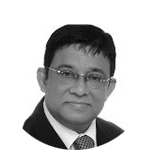 Dr. Khorshed Alam holds the  position of Chief Operating Officer in Viswa Lab, from July 2018 until today. He served as a Vice President and Regional Manager, Maritime Advisory DNV GL from 2012 until 2018. Additionally, he was in the position of Director, Engineering, Environment, Energy and R&D, APL from 2005 until 2012. Dr. Alam was the Technical Manager NSSPL (NOL) from 1994 to 2006.