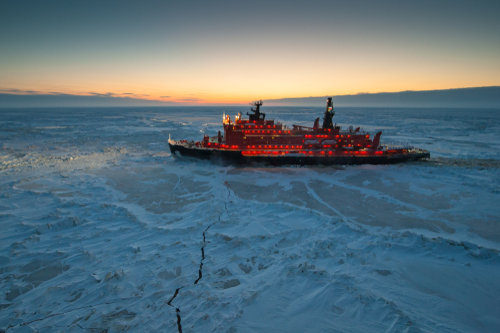 While this trend seems to open new opportunities for the future of shipping transportation, climate change concerns may hamper further development, as a growing number of companies have pledged not to ship goods through the Arctic Ocean on environmental grounds.

Launched in December 2021 and compiled by 111 scientists from 12 nations, the 2021 Arctic Report Card of the US National Oceanic and Atmospheric Administration showed that the total extent of sea ice in September 2021 was the 12th lowest on record. All 15 of the lowest minimum extents have occurred in the last 15 years and are considered the result of GHG pollution.

The substantial decline in Arctic ice extent since 1979 is one of the most iconic indicators of climate change,

In addition, recent work by NOAA on ocean acidification has shown that the Arctic Ocean is acidifying faster than the global ocean, but with high spatial variability. A growing body of research indicates that acidification in the Arctic Ocean could have implications for the Arctic ecosystem, including influences on algae, zooplankton, and fish.

What does this mean for shipping?

The above reflect how the Arctic Sea ice has been in a decade-long decline, with older thick ice that once used to cover the central arctic ocean now being almost gone. This has enabled shipping activity to extend in the Arctic, in all seasons, as it provides ships with a short cut to move goods across the world, and particularly on the key routes from China to Europe. Shorter distance means less time and, consequently, less operating costs.

Indicative of the trend, shipping activity in the Arctic region grew 25% over six years, from 2013 to 2019, while cargo traffic along the Northern Sea Route (NSR) alone has grown almost fivefold in the last five years, reaching 33mn tons in 2020 and it is predicted that this could increase to 100mn tons by 2030, according to Allianz Safety and Shipping Review 2021. The grounding of the container ship Ever Given and blocking of the Suez Canal has also added to the case for shippers using the NSR, which can shave 4,000 nautical miles off traditional Asia to Europe shipping routes. But even before this, in 2019, 977 vessels entered the IMO Arctic Polar Code area.

What is the cost?

However, the environmental cost of this trend has been known for years. The risk of fuel spill in this fragile ecosystem can be catastrophic and significantly more challenging and costly to contain, while a collision in such a remote hostile environment could prove challenging and would be a long way away from salvage teams. Those being said, Allianz 2021 data identified 58 reported shipping incidents in Arctic Circle waters during 2020 – up by 17 year-on-year and the highest total for three years.

More importantly, pollution represents a major risk for Arctic environment. When the emitted black carbon settles onto snow and ice, melting accelerates, and the loss of reflectivity creates a feedback loop exacerbating global heating. Black carbon emissions from shipping in the Arctic increased 85% between 2015 and 2019, according to NGO Clean Arctic Alliance. In addition, during 2020, the Bering Strait region of Alaska experienced a marine debris event that brought garbage ashore that was different from the types and amounts typically observed, most associated with foreign ship traffic through the region, NOAA said in its 2021 Arctic report.

Finally, increasing shipping activity causes also ambient marine noise levels to increase in the frequency bands used by marine mammals. But why is marine noise a problem? Marine mammals use vocalizations in order to communicate with each other, hunt their food and, consequently, survive. However, anthropogenic underwater noise caused by ships’ propellers, hull design, onboard machinery, and operational and maintenance activities such as hull cleaning, significantly disrupts their ability to communicate, their diving behavior and even their health. These conditions push the mammals away from their natural habitat or, worse, lead them to death. To address the issue, the IMO published guidelines in 2014 to reduce underwater noise from commercial shipping. In January 2022, the IMO Sub-Committee on Ship Design and Construction (SDC 8) started a review of the 2014 Guidelines.

As the ice retreats and thins, the Arctic Ocean is becoming easier to navigate, leaving shipping -an industry with a vulnerable environmental reputation- with new environmental challenges to encounter. The opening of new opportunities requires also a more proactive approach in the ways of managing risks. In this context, major manufacturers and shipping logistics companies committed in 2019 to not send ships through the Arctic.

We need to actively collect voyage data and change the mindset of seafarers. Polar shipping requires a much more proactive approach to risk management. We need a new framework for data, technology and training, and not just wait to study casualties if this is to become a viable and safe shipping route,