The world is changing. Technologies that were once thought as the absolute norm, are now becoming old-fashioned. Of course the shipping industry is no exception. Up until now, ships have been sailing using fuels. These may have been diesel, or even LNG, which is increasing. However, there is a new trend in ships’ propulsion. That is no other than electricity.

Electric and hybrid vessels with energy storage in batteries and optimized power control can provide significant reductions in fuel consumption, maintenance and emissions.

A study by DNV GL demonstrates how maritime batteries can become a key technology in order for Norwegian domestic shipping to contribute to national CO2-reduction targets. The study shows that reducing CO2 emissions in 2040 to below 2015 levels using green fuels will require the use of zero-emission options such as electricity and biofuels.

The cost-effectiveness of all the measures will vary according to the fuel-price scenario, but both battery electrification and biofuels will give cost-effective CO2 reductions across a range of scenarios. Hybrid solutions will also contribute to emission reductions, and battery hybridization is found to be highly cost-effective.

Electric propulsion is feasible for every kind of ship. From cruise ships to icebreakers, even war ships, as well as other marine applications, electric propulsion can improve operations in a sensitive environment.

Today, electric ships are usually using a diesel-electric hybrid system, which is mostly used by offshore and cruise vessels. Nevertheless, the number of electric ships has been doubling every year since the 80’s. This happened because of new technologies which optimize electronics, but also due to an increase in offshore exploration and the need for more energy efficient solutions.

It is no secret that the world is looking for new, more efficient sources of energy, creating a new energy era. Stricter regulations combined with lighter and more powerful batteries, play an important in making electric propulsion an attractive choice, Lucy Gilliam, an expert on aviation and shipping at the nongovernmental organization Transport and Environment, explained.

One of the arguments why batteries can’t be used is that ships don’t have enough capacity. This is not necessarily true, Lucy Gilliam said, explaining that, especially on short journeys, batteries don't add more weight in comparison to traditional fuel powered ships.

Speaking at SAFETY4SEA, Jan Kjetil Paulsen, Senior Advisor Shipping at the Bellona Foundation, seemed optimistic about the future of electric ships as well.

Electrification of shipping will in most cases represent a profitable business case: energy from renewable electricity can in most european countries compete with energy from fossil sources: Electric motors are less complicated than combustion engines, which again will increase life-time and reduce service and maintenance cost for the equipment. The initial investments (CAPEX) in new technology might be a challenge, as well as investments in the required infrastructure for shore connection and charging infrastructure. The latter must be seen as a public responsibility financed by the government and managed by the local harbour / waterways administrations.

Mr. Paulsen also added that we already have the technology to leverage electricity. It is “tested and verified both with respect to functionality and safety. Forward-leaning operators will easily be able to adapt to the new technology where applicable – simply motivated by the profitable business case.”

Moreover, analysts at IDTechEx have issued a new report, called Electric Boats and Ships 2017-2027, looking at this fragmented but often highly profitable and growing sector.

Electric ships in the pipeline

Although not widely spread as of yet, electric ships are making their appearance.

Yara and Kongsberg will build the "YARA Birkeland", the world's first fully electric and autonomous container ship, with zero emissions. The vessel will initially operate as a manned vessel in the latter half of 2018, moving to remote operation in 2019 and expected to be capable of performing fully autonomous operations from 2020.

Vision of The Fjords

The Vision of The Fjords is equipped with battery technology to transport tourists from all over the world along the spectacular fjord between Flåm and Gudvangen, the Nærøyfjord in the west of Norway, a distance of around 32 km. The fjord is on UNESCO’s World Heritage List because it remains largely unspoiled by human development and the ferry is designed with the surroundings in mind.

The Dutch Port-Liner is currently building the Tesla ships, which will be one more addition to the ongoing fuel transformation. Two giant all-electric barges will be ready by this autumn and inaugurated by sailing the Wilhelmina canal in the Netherlands, as part of a 100 million-euro project partially supported by the European Union. The battery-powered barges are able to carry 280 containers. Specifically, the first 6 barges are said to remove 23,000 trucks from the roads annually in the Netherlands and replace them with zero-emission transport. 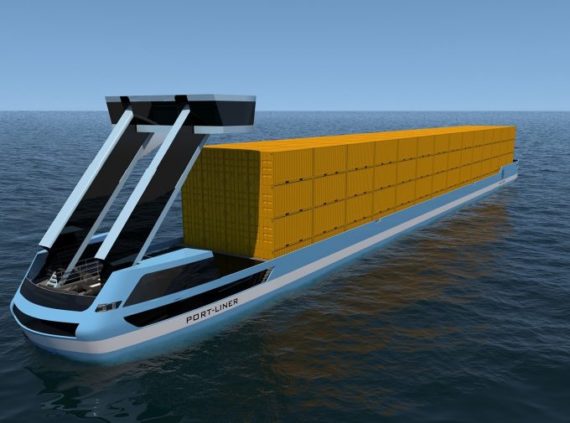 Taiwan deployed two new electric powered bunker tankers, as the state-supported CPC Corporation launched the two vessels at the port of Kaohsiung. The vessels will produce 29% less CO2 than any of the other nine gas powered vessels in CPC's fleet.

The Government of Ontario has accepted Damen's proposal to build two ferries with full electric propulsion, to operate in the Canadian waters of the Great Lakes. The vessels will be the first fully electric, non-cable vessels in Canada. The vessels' capacity to transport 300 passengers and 42 cars, and 399 passengers and 75 cars, respectively, at speeds up to 12 knots, will remain the same as with conventional propulsion.

Hurtigruten ordered two new hybrid-powered expedition ships, due to be delivered in 2018 and 2019, that will use a new and environmentally sustainable hybrid technology. These new ships will reduce the fuel consumption by approximately 20%.

The world's first 2,000-metric-ton fully electric cargo ship was launched in Guangzhou, China, and will operate along the inland section of the Pearl River Delta. The 70.5m ship incorporates a 2,400 kilowatt hours battery energy and can travel at 12.8 kilometers per hour, with zero emission of waste gas pollutants. The ship will be able to carry about 2,000 tons of products.

Currently, Norway is leading the attempts for an electric future in shipping. The electric revolution in the Norwegian maritime sector started about 3 years ago, when the first electric transfer ferry for the Norwegian Roads administration was launched, proven both a zero-emissions solution and also with respect to reduced operational costs.

In December 2015, the Norwegian parliament also passed a law requiring low- and zero-emission solutions for all national and local ferries, providing also financial support. Now more than 60 electric ferries are in the plans and are about to be put into operation in the next 34 years.

Furthermore, The Norwegian Parliament adopted a resolution to reduce cruise ships and ferries emissions in the Norwegian fjords, no later than 2026. This regulation aims to make the fjords the world’s first zero emission zone at sea, while it will have a positive impact on transport, tourism, and the maritime industry.

Can electric ships become the number one choice?

Without a doubt, electric shipping has caused an enthusiasm to the industry. But, can this way of propulsion become the norm? DNV GL’s director of battery services and products, Narve Mjøs believes that it can, as its advantages are more than its disadvantages. However, the appropriate infrastructure is needed for the uptake of electric ships.

Certainly, electric shipping is one of the solutions towards a zero-emissions future. Thanks to increasingly digitalized solutions and new technologies, doors are being opened for new agreements. As we have already witnessed, electrification of shipping is happening; new projects are being launched every day and also improved technology and products with optimized performance and efficiency are made available.

The road ahead remains challenging; electrification projects are expected mainly in short sea shipping and inland waterways, while for deep sea shipping other solutions must be found for both the short and long-term perspectives.