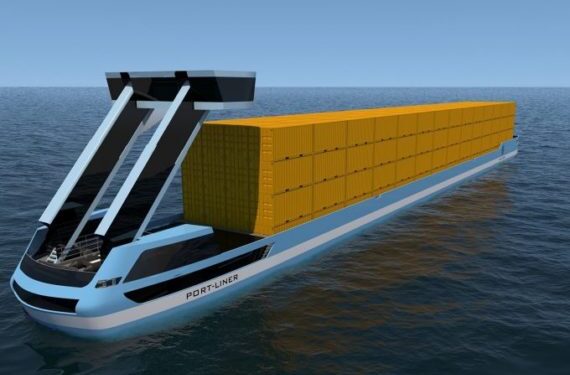 Maritime transport has been benefited a lot from renewable energy as of late. The Dutch Port-Liner is currently building the ‘Tesla ships; one more addition to the ongoing fuel transformation. The two giant all-electric barges which will be ready by this autumn and inaugurated by sailing the Wilhelmina canal in the Netherlands, are part of a 100 million-euro project partially supported by the European Union.

“There are some 7,300 inland vessels across Europe and more than 5,000 of those are owned by entrepreneurs in Belgium and the Netherlands. We can build upwards of 500 a year, but at that rate it would take some 50 years to get the industry operating on green energy.”, Chief executive of Port-Liner Ton van Meegen said at Loadstar

The battery-powered barges are able to carry 280 containers. Specifically, the first 6 barges are said to remove 23,000 trucks from the roads annually in the Netherlands and replace them with zero-emission transport. Their batteries are housed in containers for easy replacement and recharging ashore.

According to Mr. Meegen, Director of Port-Liner, there will be four ‘packed’ batteries in containers, with a duration of 34 hours. The batteries can be recharged on shore in four hours, without excluding the possibility to exchange the containers as a whole. The containers are to be charged onshore by carbon-free energy provider Eneco, which sources solar power, windmills and renewables.

Mr. Meegen further said that it could allow them to retrofit existing barges, expecting to be a big boost for the industry’s green energy credentials.

The first vessels will complete their maiden voyage later in 2018 and and expected to have a significant impact on local transport between the ports of Amsterdam, Antwerp, and Rotterdam.

Furthermonre, it has been reported that the logistics company GVT Group will use the ‘Tesla ships’ on the route between its terminal at business park Vossenberg-West and the port of Rotterdam.

The investment is worth of 100 million euros, according to the company. Port- Liner further said that it has already received grant from a European fund for the project.