Ammonia as a marine fuel: Key points and considerations 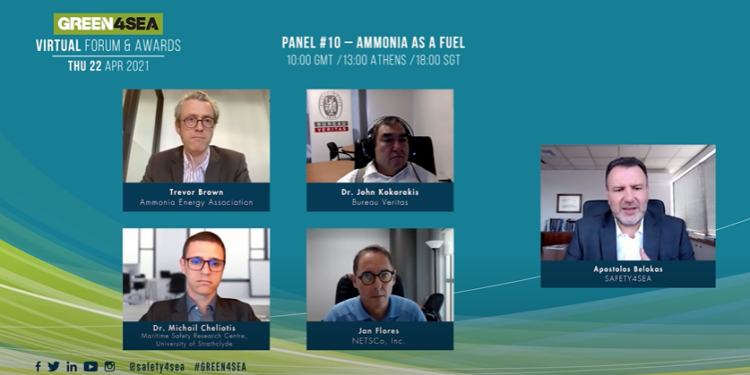 Although there are many advantages from using ammonia as a marine fuel, there are also many challenges around which need to be controlled by technical and regulatory measures in order ammonia to become a feasible solution for a carbon-free shipping economy. In light of the situation, during the 2021 GREEN4SEA Virtual Forum, speakers of Panel 10, focused on the potential of ammonia as a fuel and its latest developments.

Ammonia seems to be a promising carbon free energy carrier with high energy density and already available infrastructure distribution with respect to other carbon free solutions.

According to Mr. Brown, currently, ammonia production accounts for a significant share of about 1% of global CO2 emissions. 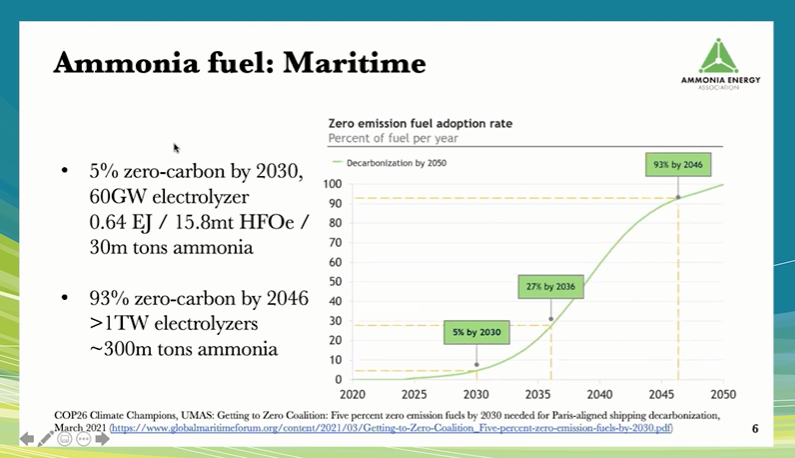 As discussed, a pathway to market is to understand the role ammonia has within the energy transition. Based on the above infographic, by 2030, zero carbon fuels are expected to hit a 5% fuel mix. That means that the industry has 9 years to build 60GW of electrolyzers in order to produce approximately 30m tons of ammonia.

What is more, Mr. Jan Flores presented the business case for ammonia vs other alternative fuels, highlighting the following points: 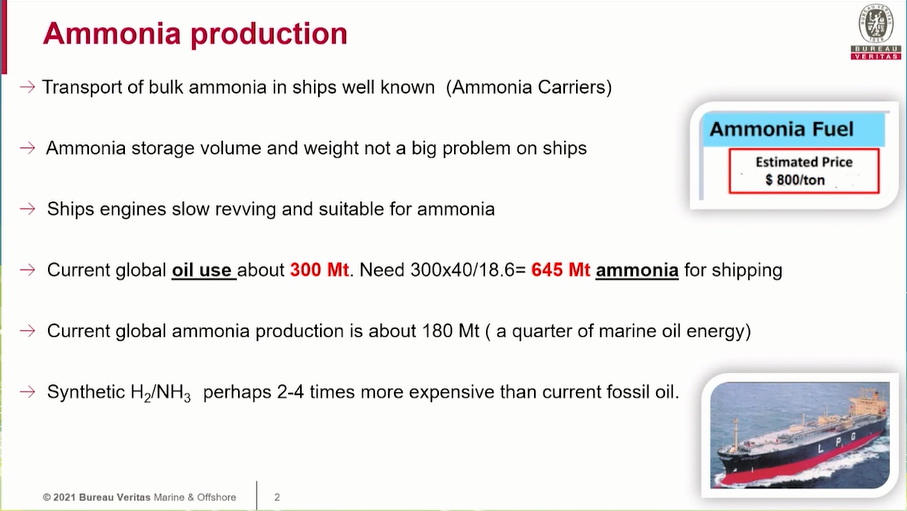 Why burn ammonia for power?

Mr. Kokarakis marked that ammonia has the potential to substitute pure hydrogen for storage, while is easily to liquefy and transport. At the same time, it is non-flammable and non-explosive but highly toxic and corrosive. As further explained, anhydrous ammonia may cause stress corrosion cracking in carbon-manganese steel or nickel steel.

80% of ammonia produced today is utilized in the fertilizer industry, therefore its production must increase in order to serve as a fuel for shipping.

Following the discussion, Mr. Michail Cheliotis shared that ammonia can be part of the complex solution for achieving the IMO 2050 decarbonization goal. Mr. Cheliotis shed light on the safety aspects around ammonia as a fuel, marking that:

We need to see not only how ammonia is a decarbonization solution in the short term, but also how it fits within the shipping industry in the long term. In fact, we need to take into account the shipping trends and see how ammonia can actually serve them.

Overall, speakers agreed that although ammonia is an attractive solution as a marine fuel, there are still some concerns around its availability, infrastructure, storage and regulations.