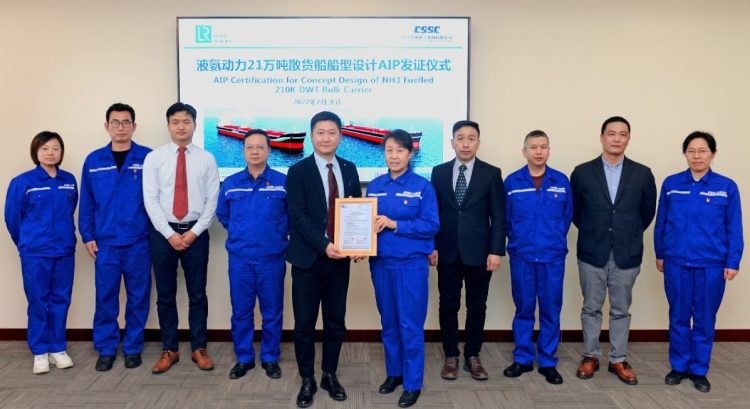 As the classification society selected for the project, LR’s role was to review the suitability and risks of the design. Ammonia is considered one of the most promising alternative fuels, supporting the marine energy transition away from carbon-based power sources.

This is an exciting project, not only for LR who has had many firsts in this area, but for DSIC as this is the first design of its kind and shows its commitment to a transition to zero-carbon fuels. The award of this AiP is another important step toward the decarbonization of the maritime industry, showing the feasibility of powering commercial vessels with zero-carbon solutions in the near future.

DSIC has deep research expertise in low and zero carbon vessel innovation, cooperating with LR classification on green ship research and development. In 2019, LR issued the concept design AiP to DSIC for the ammonia-powered ‘C-Future’ 23,000 TEU ultra large container ship. Now we have an AiP for a 210,000 dwt bulk carrier, capable of being powered by ammonia, a leading zero-carbon shipping fuel

…Guan Yinghua, Deputy Chief Designer, DSIC, said. Guan Yinghua concluded that It is further evidence of DSIC working together with its customers for a zero-carbon future.