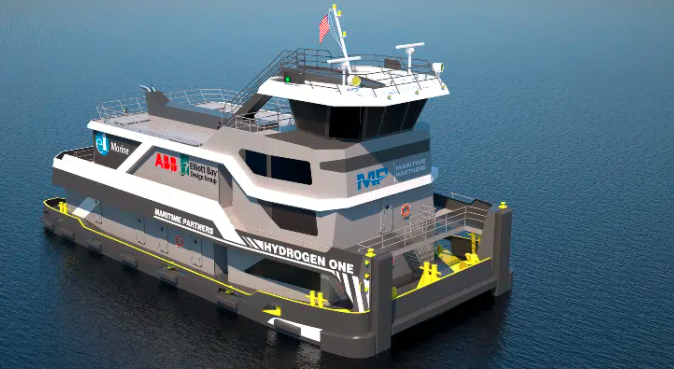 World’s first methanol-fuelled towboat, Hydrogen One will become available for charter during 2023, in an effort to meet the pressing demand for sustainable towboat operations.

It is known that decarbonising the towboat sector poses substantial challenges, particularly due to towboats’ inherent size, space, and weight limitations.

As informed, M/V Hydrogen One will be IMO 2030 compliant, and meet all requirements of the US Coast Guard’s Subchapter M regulations.

The ship has been designed by Elliott Bay Design Group using proven, efficient technology throughout, from ABB’s electrical power distribution and automation to e1 Marine’s methanol-to-hydrogen fuel cell, and it will be able to perform at standard operational speeds for up to 550 miles before it needs to refuel.

Methanol is a common towboat cargo, and it is available in 88 of the world’s top 100 ports. The M/V Hydrogen One’s use of e1 Marine’s reformer technology generates hydrogen from methanol on-demand, which also makes it considerably safer than transferring and storing hydrogen directly, and the ship’s crew will require minimal additional training to use the technology.

Shipowners have been understandably reluctant to commit to low carbon fuels until the infrastructure is available to refuel their vessels. The M/V Hydrogen One solves that problem by using methanol, which is safe and readily available worldwide.

Concluding the newbuild vessel will join the fleet of Louisiana-based Maritime Partners in order to offer its excellent emissions reduction capabilities and boost cost-effective operations.