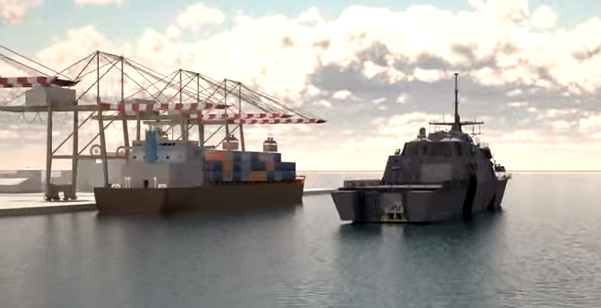 US Navy to weaponize unmanned vessels

The US Navy, will cooperate with aerospace and defence company, in order to add anti-surface weapons to an unmanned surface vehicle, which, until now, has been used as a passive platform for mine countermeasures.

NAVSEA will be responsible for the construction of a surface warfare payloads onto the Common Unmanned Surface Vehicle (CUSV), which will include various missiles, designators, sensors, and remote weapon stations.

The CUSV was developed initially, as a mine countermeasure to tow the Unmanned Influence Sweep System (UISS), which emits signals that would cause mines triggered by sound or nearby electromagnetic signatures, to detonate.

Wayne Prender, senior vice president of control and surface systems, speaking to USNI News, seemed confident that the unmanned boat will successfully conduct missions beyond minesweeping and beyond mine countermeasures.

While still unclear, some of the larger anti-surface missiles could be too large for the USV’s 14-foot-long, 6-foot-wide and 3.5-foot-high payload space, and it could act as a forward targeting node for larger ships.

It could also field smaller missiles, that the US Navy intends to use for small boat anti-surface warfare like the AGM-114L Longbow Hellfire missile. The service will use a vertically launched Hellfire for its Littoral Combat Ship surface warfare mission package.

The CUSV will also be able to field remotely operated weapon systems like a 30mm autocannon, that the US Navy uses to protect against swarm boat threats in the LCS surface warfare package.

Except US, other countries, such as Singapore and Israel have been using remotely piloted vehicles for port security and force protection missions.

Specifically, these countries use the Rafael Protector SV USV (aka“Death Shark”), which used its electro-optical and infrared sensors to field a .50 caliber machine gun, a grenade launcher or a Gatling gun. Singapore, in particular, has been using the Protector for patrol missions since 2005.

The armed CUSV can be used for patrol missions in places like the Persian Gulf to supplement the aging fleet of Cyclone-class patrol craft operating in U.S. 5th Fleet, the US Navy informed.