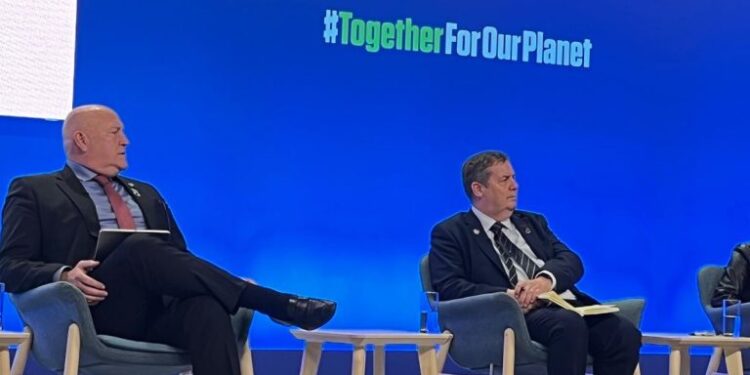 In a landmark moment for maritime workers the formation of a Just Transition Maritime Task Force has been agreed to drive decarbonisation of the industry and support millions of seafarers through shipping’s green transition.

More specifically, the task force will push forward shipping’s climate goals while protecting its works and their communities, ensuring opportunity for all.

Namely, it will focus on the development of new green skills and green and decent work, identifying best practice across the value chain and providing policy recommendations for an equitable transition, with a specific focus on developing economies.

The task force was agreed during high-level discussions at COP26, including in discussions with the Shipping lead, UN climate champions team, whose founding members include the International Chamber of Shipping (ICS), representing shipowners, the International Transport Workers’ Federation (ITF), representing seafarers and port workers, and the United Nations Global Compact, the world’s largest corporate sustainability initiative.

Many of our seafarers come from developing nations, who are witnessing first-hand the effects of climate change. We must ensure they are given the green skills they need to keep global trade moving, and that developing nations can have access to the technologies and infrastructure to be part of shipping’s green transition

The world’s largest economies also reiterated the importance of Just Transition this week as 30 nations committed to strategies ensuring that workers, businesses and communities are supported as countries transition to greener economies.

What is more, the move represents the first of its kind for shipping and will provide clear leadership and steer for the industry to coordinate efforts and work with governments, industry, workers and their representatives to ensure a people-centred transition for the maritime industry.

This task force will give international shipping the opportunity to lead the transformation of transport. We welcome the commitment from all partners, from industry and the UN agencies, to tackle this challenge collaboratively with workers and their unions

As for Sanda Ojiambo, CEO and Executive Director of the United Nations Global Compact, she noted that “businesses are raising ambition for climate action and preparing for the transformative shift in our economies and societies necessary to secure a 1.5C future.”

The task force represents the best of sectoral social dialogue. It echoes the tripartite approach set out in the ILO’s 2015 Guidelines for a just transition towards environmentally sustainable economies and societies for all, taking a human-centred approach to achieving green shipping

A meeting is expected to take place now in December to begin setting up the practical next steps for the Just Transition Task Force.

This announcement comes as Transport Day at COP26 started with the launch of Clydebank Declaration, which aims to support the establishment of zero-emission maritime routes between 2 (or more) ports.

The signatories of the Declaration will boost the development of at least 6 green corridors by the middle of this decade, while scale activity up in the following years, by inter alia supporting the establishment of more routes, longer routes and/or having more ships on the same routes.

After the launch of the declaration, Global Maritime Forum released a report claiming that green routes can get the ball rolling on the transition to zero-emissions shipping.

As the report explains, zero-emission fuels and vessels must start being deployed at scale over the next decade to achieve full decarbonisation of the shipping sector by 2050.