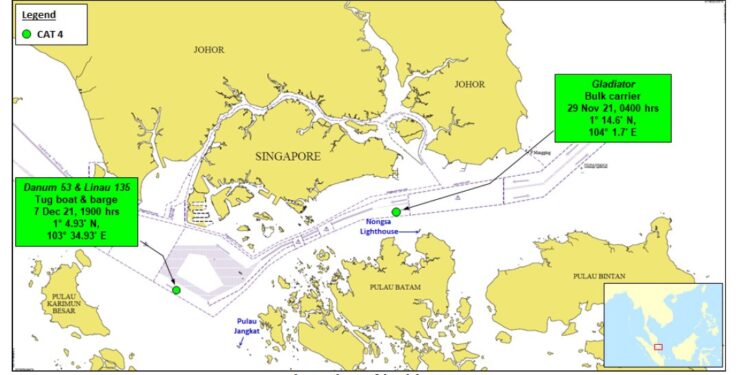 During 7-13 Dec 2021, two incidents of armed robbery against ships in Asia were reported to the ReCAAP ISC. Both were CAT 4 incidents and occurred to ships while underway in the eastbound lane of the Traffic Separation Scheme (TSS) in the Singapore Strait.

The first incident occurred on 29 Nov to a bulk carrier while underway at approximately 3.8 nm northwest of Nongsa Light House, Batam Island (Indonesia). The duty oiler sighted four unauthorised persons in the vicinity of the engine room of the ship. The ship alarm was raised and a search on board the ship was conducted with no further sighting of the perpetrators. Some engine spares were stolen.

The second incident occurred on 7 Dec to a barge towed by a tug boat at approximately 10.2 nm from Pulau Jangkat (Indonesia). A small boat was seen tied to the starboard side of the barge, and three unauthorised persons were sighted boarding the barge. The alarm was raised and a search was conducted on board the barge with no further sighting of the perpetrators. The master was unable to confirm if any items were stolen from the barge.