The Transport Safety Investigation Bureau (TSIB) of Singapore published its report on the fatal fire of Maersk Honam on March 2018. The reports notes that the actual cause of the fire was not conclusive.

On 6 March 2018, during fine weather, the Singapore registered container ship Maersk Honam (MH), which was carrying 7860 containers, while en route from Singapore to Suez Canal, expeirienced a severe fire that started from no.3 cargo hold when the ship was in the Arabian Sea, about 900 nautical miles west of the coast of India.

All the 27 crew responded to fight the fire by conducting boundary cooling and subsequent release of carbon dioxide (CO2) into the cargo hold but were not successful in extinguishing the fire. The crew sent out a distress signal and eventually abandoned ship at about 2215H.

On 7 March 2018 at about 0130H, another ship, the ALS Ceres, which had responded to the distress signal, picked up a total of 23 crew from the lifeboat. Four crew members were reported unaccounted for and declared missing. Search and Rescue (SAR) operations of the surrounding seas were also carried out. One of the surviving crew succumbed to the injuries while en route ashore for medical treatment.

After Maersk Honam was abandoned, continuous firefighting and boundary cooling was performed by several assisting ships for about five days, because of hotspots inside the cargo holds forward of the accommodation, to bring the raging fire under control.

On 10 March 2018, the salvage team boarded Maersk Honam for firefighting and SAR operations, where they recovered remains of three of the four missing crew the next day. Due to the severe fire occurrence that affected the accommodation space, no.1, 2 and 3 cargo holds, Maersk Honam was unfit to proceed on voyage, and Maersk arranged for the ship to be towed to United Arab Emirates (UAE) as the port of refuge after the smouldering of the cargo hold had subsided.

As most of the evidence was destroyed by fire, the investigation team was not able to conclusively determine the cause of the fire.

However, there was evidence that the integrity of SDID in no.3 cargo had been compromised such as the chlorine-smell smoke, the irritating and uncomfortable feeling, including breathlessness experienced by the crew at the onset of the event. The heat generated by spontaneous selfdecomposition of the SDID worsened, as it was carried in block stowage.

In addition, despite the good efforts demonstrated by the crew in taking care of each other and saving lives during the emergency, the report notes that the fire alarm was not raised at the onset of the event causing a delay in the closure of the magnetic fire doors of the accommodation, and non-closure of exterior ventilation vents. These had resulted in toxic smoke entering and spreading within the accommodation areas.

In its report, TSIB provided the following recommendations for Maersk:

As for the flag administration, TSIB suggests: 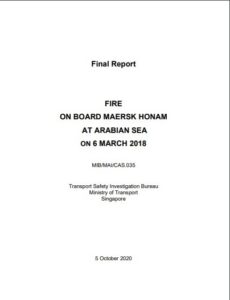