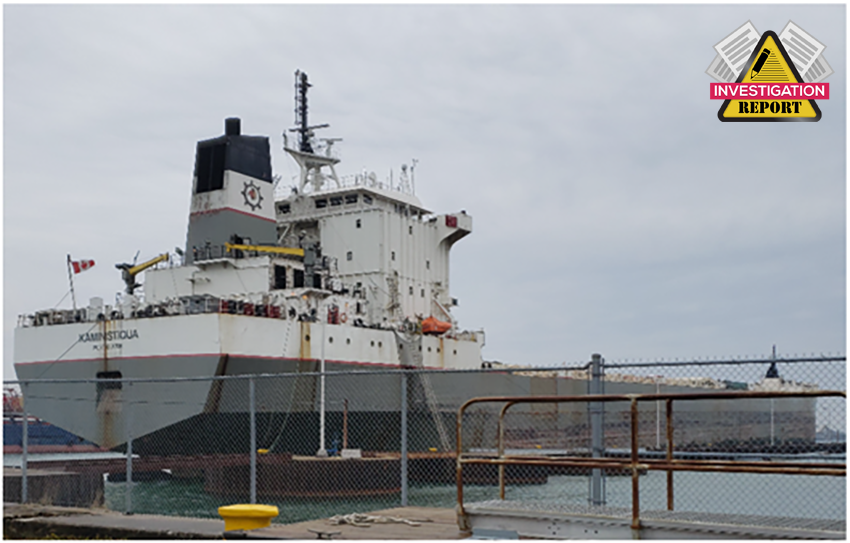 The bulk carrier Kaministiqua on the day of the occurrence / Credit: TSB

The Transportation Safety Board of Canada (TSB) released its investigation report into the bottom contact of bulk carrier Kaministiqua with the bulk carrier Algoma Discovery, in Kahnawake, Quebec, in November 2019. The brief report highlighted issues associated with poor communication between the two Masters while manoeuvring in a narrow channel.

On 27 November 2019, the upbound bulk carrier Kaministiqua was transiting in the South Shore Canal of the St. Lawrence Seaway, off Kahnawake, Quebec.

The vessel sustained damage. No injuries or pollution were reported.

The Canadian Modifications to the COLREGs require that, in a narrow channel where there is a current and 2 vessels are meeting from opposite directions, “the vessel proceeding with the current or tidal stream shall be the stand-on vessel and shall propose the place of passage […]”and the side on which the vessel will pass. The Canadian Modifications further specify that vessels may use a bridge-to-bridge radiotelephone instead of the prescribed sound signals to reach agreement in a meeting.

As the Algoma Discovery was proceeding downbound as the stand-on vessel (i.e., with the current) along the South Shore Canal, it was required to propose meeting and passing arrangements to the Kaministiqua. While the masters of the 2 vessels did agree to a planned location of passage, they did not revise or update the plan as it became apparent that they would not meet in the agreed location.

A few brief exchanges over VHF radiotelephone occurred between the master of the Kaministiqua and Algoma Discovery as they made their meeting and passing arrangements. The exchanges did not follow standardized bridge-to-bridge VHF radiotelephone communication procedures and phraseology as prescribed by Industry Canada’s Syllabus for the Restricted Operator’s Certificate – Maritime Commercial (ROC-MC).

The lack of communication and explicit coordination between the vessels may have impaired the masters’ shared understanding of the situation.

Bridge teams must establish and implement comprehensive meeting and passing arrangements and communicate effectively to ensure a common understanding if circumstances change.

Additionally, it is important that bridge teams consider the hydrodynamic effects their vessels are subject to while navigating and manoeuvring in narrows such as the St. Lawrence Seaway. 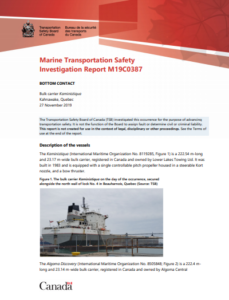