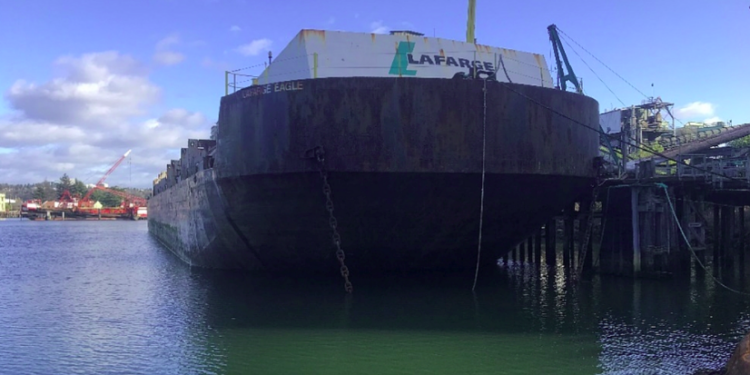 TSB Canada released an investigation report into the grounding of the barge Lafarge Eagle while under tow of the tug Mauna Loa in the Fraser River, BC, on November 1, 2020. After investigation, TSB noted that an SMS is only effective at mitigating risks only if it includes a formal risk assessment process.

When the Mauna Loa departed the Lafarge terminal with the barge in tow, there were several conditions present that were not viewed as hazards by the crew: the departure was in darkness, the channel in which the loaded barge was to be turned was narrow, and the current was at maximum ebb.

Additionally, the Mauna Loa’s single-screw configuration increased the difficulty of the planned manoeuvre, as did the light fuel load and its forward distribution. Consequently, the tug was lighter aft than usual, resulting in the propeller providing less thrust than the crew were accustomed to, the report says.

Furthermore, schedule changes resulting from loading issues had led to the engagement of an assist tug that had never assisted at this location or for this company.

Finally, a training master was assigned to the Mauna Loa’s controls, even though the departure manoeuvre was challenging and had the potential for significant consequences in the event it did not go as planned.

Noise from the vent stack near the aft conning station also made communications between the master and training master more difficult. The assist tug did not query the Mauna Loa when it became evident that the manoeuvre was not going according to plan, which meant that the master of the Mauna Loa was not prompted about how the assist tug could help control the barge or stop its forward momentum.

An SMS is only effective at identifying hazards and mitigating risks if it includes a formal risk assessment process.

Operators that have implemented an SMS, including those that have voluntarily done so, must ensure that they have a risk assessment process in place, particularly for critical stages of a voyage,

Towing operations frequently require the coordinated efforts of multiple vessels, making it vital that all vessels involved maintain effective communication and proactively intervene when manoeuvres do not go according to plan.

TSB has created this video to illustrate the factors leading to girding and the recovery methods: