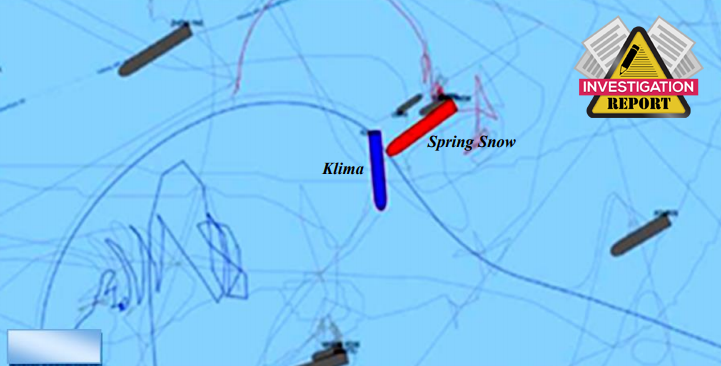 Transport Malta MSIU issued an investigation report on the allision of the bulk carrier MV KLIMA with the Marshall Island-flagged bulk carrier SPRING SNOW and the Singapore-registered bunker barge LIBRA in the Eastern Special Purpose Anchorage, Singapore, in July 2019. The report identified the vessel’s yaw and the prevailing tidal stream acting on the vessel as key contributing factors to the incident.

In the early hours of 05 July 2019, the Maltese registered bulk carrier Klima anchored at Eastern Special Purposes ‘A’, Singapore for bunkers. Bunker barge Libra was made fast alongside.

At about 0400, the vessel started to yaw. As the tidal stream intensified, the surge at the extremity of her yaw strained her anchor and anchor chain, and Klima was drawn closer to Anatoli, which was at anchor on her port quarter.

The master decided to shift Klima and re-anchor with the bunker barge tied alongside. Subsequently, Klima and Libra allided with Spring Snow during the shifting manoeuvres.

The safety investigation identified several contributing factors including, the monitoring of the anchor position, the vessel’s yaw, and the prevailing tidal stream acting on the vessel.

The course of Klima’s movement to secure a suitable anchor position, proximity of anchored vessels, impact of tidal stream on manoeuvrability and the limited options available to the master to counter the vessel’s drift towards Spring Snow had contributed to the complexity of the already evolving situation.

Naturally, any of the available options, irrespective of which one was taken by the master, was not free from the risk of an adverse outcome. The absence of informative communication led to different mental models on the bridge.

The following corrective actions were taken by Klima’s managers: 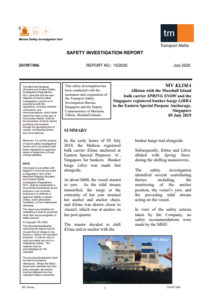