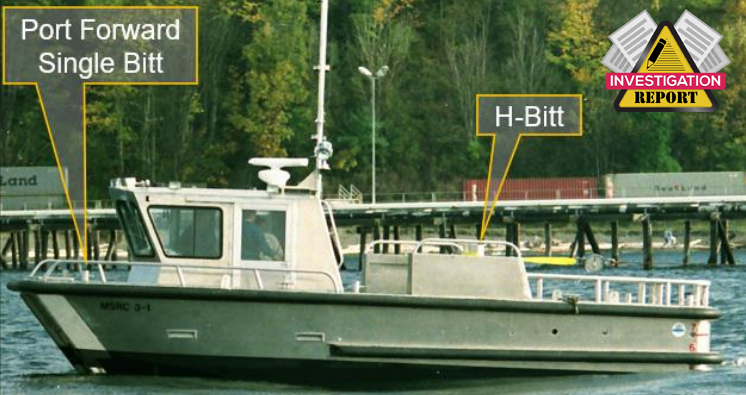 NTSB issued an investigation report on the capsizing and sinking of the workboat MSRC 8-1, resulting in two fatalities while at Boothville Anchorage, Lower Mississippi River, in January 2019. The report highlighted an unforeseen risk associated with conducting the exercise in a strong current, although the company's safety procedures and crew training were adequate.

About 1038 local time on 16 January 2019, the workboat MSRC 8-1, which operated from the oil spill response vessel (OSRV) Louisiana Responder, capsized during an oil spill boom deployment exercise in the Lower Mississippi River near Boothville, Louisiana (mile 18), trapping both of its crew inside.

While the OSRV’s crew and the US Coast Guard worked to rescue the trapped MSRC 8-1 crew, the boat sank.

One crew member died in the sinking; the other crew member is still missing and presumed dead.

An oil sheen became apparent on the water after the vessel sank. There was no other pollution.

​The National Transportation Safety Board determines the probable cause of the capsizing of the workboat MSRC 8-1 was the boat becoming perpendicular to a strong river current, for an undetermined reason, while tethered to the oil spill response vessel Louisiana Responder.

Contributing to the accident was the unforeseen risk associated with conducting the exercise in a strong current, which also contributed to the severity of the outcome by hampering rescue efforts.

Neither of the crewmembers on the MSRC 8-1 survived the capsizing and sinking, and thus there is no account of the events or helm and propulsion orders given before the vessel capsized. Witness accounts all describe the deployment of the oil spill boom as normal up until the time that the MSRC 8-1 moved ahead and the deckhand removed the slackened boom towline from the forward port bitt.

The operator of the MSRC 8-1 was considered by the company to be adequately trained and experienced in the operation of the vessel in the river current conditions experienced on that day.

Because of the current in the river on the accident day, any loss of control or unintended maneuvering of the boat while tethered to the OSRV by the boom risked capsizing the vessel.

Although the exercise procedure had been conducted numerous times without incident during previous exercises, the NTSB believes that, with the arrangement of the towline and H-bitt on the MSRC 8-1 at the time of the accident, the procedure for transitioning the boom from directly astern of the OSRV into the J-configuration was inherently dangerous in the prevailing current.

Meanwhile, company policies, the use of checklists and standard procedures, and supervisor safety leadership indicated that the company had an established safety culture amongst its vessel crews and responders. On the day of the accident, a briefing was held for all persons involved in the exercise, and all attendees, including non-company personnel there to witness the exercise, understood that they had stop work authority if an unsafe condition arose. All company employees interviewed were aware of and believed that they could raise safety concerns without any negative feedback or penalty for doing so.

However, despite these safety policies and the safety culture that encouraged stoppage of work should problems arise, the responder team did not recognize the dangerous situation that existed on the accident date. 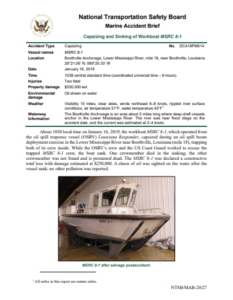