New figures published by the ports industry present the hidden scale of the industry across the UK. As well as being key trading gateways, handling 95% of UK trade, ports are also the base of the entire marine economy and are increasingly supporting other types of valuable economic activity, such as leisure, fishing, offshore energy and marine aggregates.

The Centre for Economics and Business Research (Cebr) has been commissioned by Maritime UK to quantify the economic contribution of the ports industry. The report assesses the contribution of the Maritime Sector as a whole, at industry-level, in Scotland, Wales, the Liverpool City Region and in the Solent LEP region.

In this context, the ports industry consists of all those activities carried out in ports. This report is using a combination of data sources, to quantify both the direct and aggregate economic impact of these activities in the UK economy in the years 2010 to 2017.

The ports industry makes a macroeconomic contribution to the UK, via the key macroeconomic indicators: business turnover, Gross Value Added (GVA), employment and the compensation of employees.

In fact, it is estimated that in 2017 the ports industry directly contributed around £29.0 billion in business turnover, £9.7 billion in GVA and 115,000 jobs for UK employees. This respectively equates to 61% of turnover, 57% of GVA and 52% of employment directly supported by the wider UK Maritime Sector in 2017.

The ports industry also raises millions of pounds each year to the UK Exchequer and makes a significant contribution to UK trade through exports of goods and services. Namely, the industry contributed just under £2 billion in tax revenues in 2017, spread across Corporation Tax, Income Tax, National Insurance Contributions (NICs) and Business Rates. The industry is also estimated to have exported £9 billion of goods and services in 2017

In addition, after quantifying the aggregate economic impacts through the industry supply chains and induced effects on expenditures, it is estimated that the ports industry assisted in supporting a total of £28.7 billion of GVA in 2017. This indicates that, for every £1 in GVA directly contributed by the ports industry, a further £2.97 in GVA is stimulated across the wider UK economy.

Furthermore, while the economic contribution of the industry is extended across all UK regions, the South East region contributes the most to GVA, turnover, employment and compensation of employees both through direct and aggregate impacts.

You may see more information in the following PDF 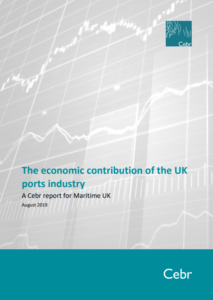