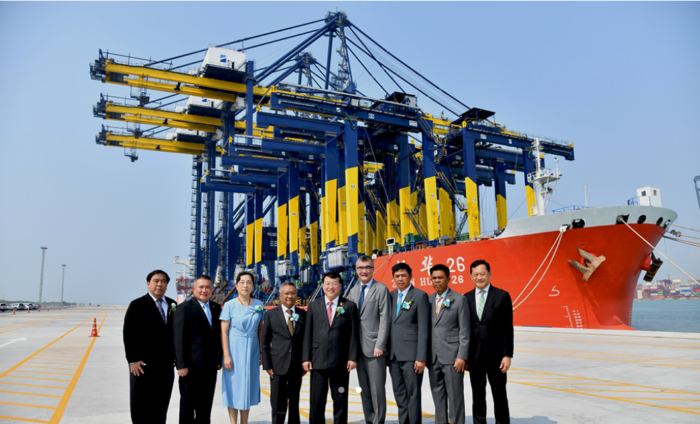 Hutchison Ports Thailand (HPT), the largest container terminal operator in the area, has opened Terminal D at Laem Chabang Port. The opening ceremony for the USD 600 million facility took place on January 30. Terminal D is the first terminal in Thailand to handle some of the largest ocean-going vessels. When completed, the terminal is to have a total quay length of 1.700 metres, with 17 Super Post-Panamax quay cranes and 43 electric rubber-tyred gantry cranes all using remote control technology.

Mainly, the construction of terminals D1, D2, and D3 was initially started in 2016.

Also, by the middle of 2019 the Phase 1B remaining, will be completed, servicing a combined overall of 1.000 metres of berth, six quay cranes and 20 supporting yard cranes.

When all terminals are complete, Terminal D will be the largest and most advanced deep-sea container terminal in Thailand.

Additionally, according to the port's statement, the terminal will be the first and the only terminal at the port to feature remote control technologies.

In November 2018, Hutchison Ports Thailand welcomed the largest container vessel to berth in Thailand to date.

Concluding, Terminal D is a part of Thailand’s Eastern Economic Corridor (EEC) under Thailand 4.0’s objective to modernize the economy through improved infrastructure and innovation.

Upon its completion, the terminal will facilitate the growth of container volumes at Laem Chabang Port, adding the much-needed capacity by 3.5 million TEU.