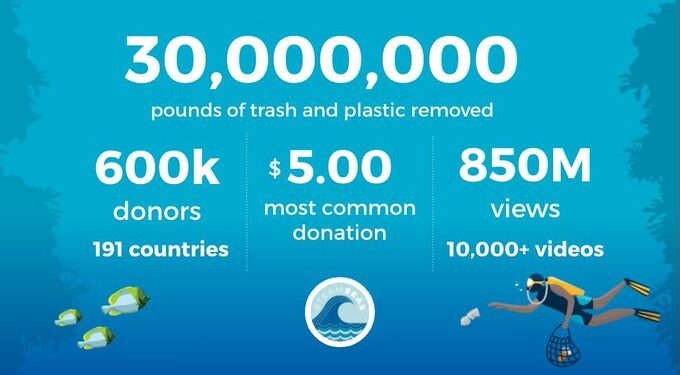 Internet’s influencers and 600,000 donors are celebrating the success of #TeamSeas, a crowdfunding campaign to raise $30M by 1 January in order to remove 30M pounds of trash from oceans, rivers and beaches.

Namely, for every $1 raised, TeamSeas and its nonprofit partners, Ocean Conservancy and The Ocean Cleanup, will remove one pound. This means that the $30M raise equates to cleaning up 30 million pounds of trash and plastic.

The three of them had also launched another campaign in 2019, called #TeamTrees, and raised $20M to plant 20M trees on six continents.

TeamSeas donors span from 191 countries and  multiple generations. The campaign was launched on 29 October, raising $8M in its first 48 hours.

This is the start, not the end, of a journey of ocean conservation and advocacy for so many. Together with our partners, we will deliver on our promise to remove 15 million pounds of trash from beaches and seas around the world, while working to reduce plastics and keep them out of the ocean in the first place

What is more, TeamSeas funds will support new deployments and extended operation of The Ocean Cleanup’s Interceptor solutions, including the vessels Rober referred to as ‘trash-eating robots’.

TeamSeas, The Ocean Cleanup, and the United Nations Development Programme (UNDP) aim to increase the operational model exemplified in the DR to more of the 1% of rivers responsible for 80% of the trash flowing into the ocean from rivers.