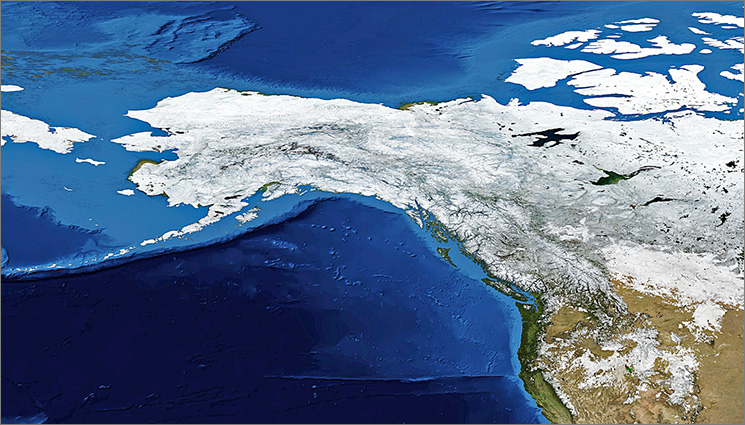 When scientists on a boat in the Gulf of Alaska pulled their net in August, they saw something stunning: a live ocean sunfish. Mostly found in the tropics or temperate waters, these giant 6-foot-long snub-bodied creatures are incredibly rare in Alaska. And that was just the start. Four days later, one of the same researchers saw a warm-water blue shark circling near another sunfish. Days after that, the boat hauled up yet another living sunfish.

"No one had ever talked about seeing one alive," said Wyatt Fournier, research fish biologist with the National Oceanic and Atmospheric Administration. "Not only did we get two aboard in one week, but my commercial fishing buddies started telling me they were bumping into them when fishing for salmon."

The waters of the Pacific Ocean have been so unusually warm this year that fishermen and researchers from Alaska to California have spied a host of bizarre visitors, from thresher sharks that rarely make it north of Vancouver, B.C., to the northernmost recorded sighting of a skipjack tuna.

Portions of the North Pacific haven't seen sea temperatures this high in at least a century of record-keeping. In some areas, waters are more than 5 degrees Fahrenheit above average.

"The North Pacific hasn't been this warm ever, as far as anyone knows. It's really strange," said Bill Peterson, oceanographer with NOAA's Northwest Fisheries Science Center in Newport, Ore. "It looks like an El Nino, but it really isn't. We don't really know what it is."

For the moment, oceanographers and atmospheric scientists don't see a link to human-caused climate change, but also say what they've seen doesn't match other recognized patterns in ocean conditions.

They believe the severe warmth may well be the result of poorly understood natural variability - in this case a ridge of high pressure that kept the normally stormy Pacific unusually calm through two winters. That helped prevent cold water at depth from churning up and cooling the ocean surface.

"I don't know that there's much to make of this, other than you've got a really unusual two-winter pattern of weather than left a huge imprint on the ocean," said Nate Mantua, with the Southwest Fisheries Science Center in California.

But, depending on how long the pattern lasts and what comes next, this unusual warmth could have important implications for how and where sea life lives. In some cases, it already has.

The lists of strange sightings along the U.S. West Coast this year is long. Pilot whales, marlin and wahoo have been seen or caught off Southern California. A mahi mahi was caught off the Oregon coast and an uncommon but not unheard-of sunfish washed ashore at Washington's Cape Disappointment State Park.

Fishermen in Alaska have caught a "bumper crop" of black cod and silvery pomfrets near the coast, even though they're usually found way out at sea.

Most striking to many was the skipjack tuna caught near the mouth of the Copper River. According to the bible of fish in that region, "Fishes of Alaska," the only other documented sighting was in 1981 several hundred miles south in Yakutat Bay.

"It's very weird," said Peterson. "When you haven't seen this before in your life, you start making up stories in your head trying to understand what it all means."

Even the tiny plants and animals that form the base of the food chain are different in some places.

"When waters stay warmer, we get waters normally found in Lower 48," said Russ Hopcroft, a plankton expert at the University of Alaska Fairbanks. "In the samples we collected in September we had an inundation of species that belong in the south. It was really noticeable."

How that impacts the rest of the marine world is not yet very clear.

"Fish are developed for certain thermal regimes; when the temperature changes, so does their habitat," said Fournier, the NOAA biologist. Temperature also "changes the location of primary food production and the metabolism of fish. As it gets warmer, metabolism increases and fish need more food. But is enough of it there when they need it?"

It's too soon to say how all these changes could impact returning salmon next year and beyond. But there's legitimate cause for concern.

"Everybody is holding their breath," said Laurie Weitkamp, with NOAA in Oregon. "I personally have big concerns about fish that went out this year and certainly for next spring."

"They have to match timing of where they are and where the food is in their environment, and warm years tend to mess with that timing," he said.

In many ways the question is about what happens next, whether the warm-water "blob" persists - and where.

Mantua suspects weather patterns are returning to something more predictable. But he's still ready for anything.

In the start, I was frank with you propecia before and after has changed my being. It has become much more fun, and now I have to run. Just as it is fabulous to sit.