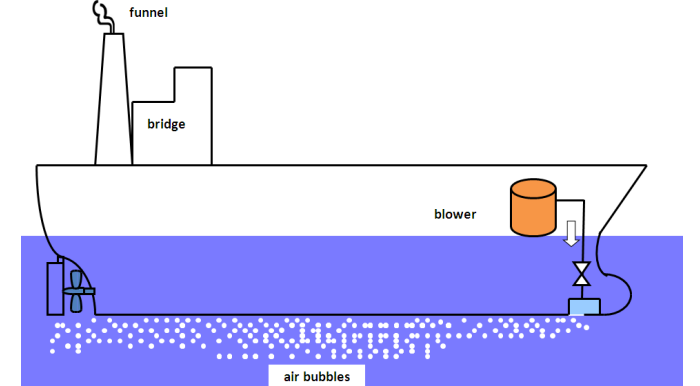 ABS published a report, providing an introduction to air lubrication technology for shipbuilders, shipowners, and other interested parties. In the paper, ABS presents a summary of reported full-scale sea trials and current developments.

In 2018, IMO released an initial strategy to reduce GHG emissions from ships. In order to lower carbon emissions and to comply with increasing Energy Efficiency Design Index (EEDI) Phase III levels, various energy saving technologies, such as air lubrication, have been developed to meet the industry need. Air lubrication systems are recognized by IMO as a Category B-1 “Innovative Energy Efficiency Technology” as described in MEPC.1/Circ.815.

The more efficient Bubble Drag Reduction uses very small or even micro-sized bubbles. The size of the these bubbles is generally less than 0.1 mm. However, micro-bubbles can be difficult to produce on a full-scale ship, and are less effective at low speeds due to buoyancy. As bubbles become bigger they can no longer maintain their spherical shape, and they deform in turbulent flows.

After many years of studying the BDR method, the focus of the air lubrication method extended to the air layer. When enough air is injected into the near-wall region of a turbulent boundary layer of water, the injected air will coalesce to form a continuous or nearly continuous layer of air separating the solid surface from the water flow. When the injected air increases, the coalesced air layer is able to maintain a fully continuous air layer covering a larger wetted surface and subsequently results in a greater skin friction drag reduction.

The partial cavity concept uses a recess or cavity on the hull bottom where air is injected from inside the hull so that an inflated air cavity is formed and persists to the rest of the hull, separating the hull from with water, thus reducing frictional resistance. The air layer in the cavitating flow in the cavity is much thicker than the turbulent boundary layer on the ship hull and requires smaller air injection rate to maintain the air layer than BDR or ALDR.

Applications of the technology

Up to 2018, 23 vessels were identified to have air lubrication system installed on board. Most of them are cruise ships, followed by ferries.

Several companies have also announced their plan to install an air lubrication system on vessels, including Samsung Heavy Industries and Silverstream.

The overview of the performance of air lubrication systems is based on the information reported in the referenced literature. Overall, 18 full scale performance tests between 2002 and 2015 were identified. The net energy savings reported range between 4% to 10%.

However, the net savings from air lubrication is difficult to determine and estimate.

See more information on air lubrication, in the PDF below 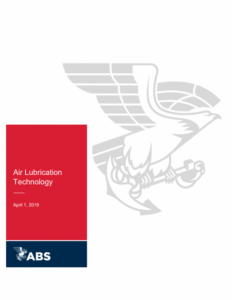