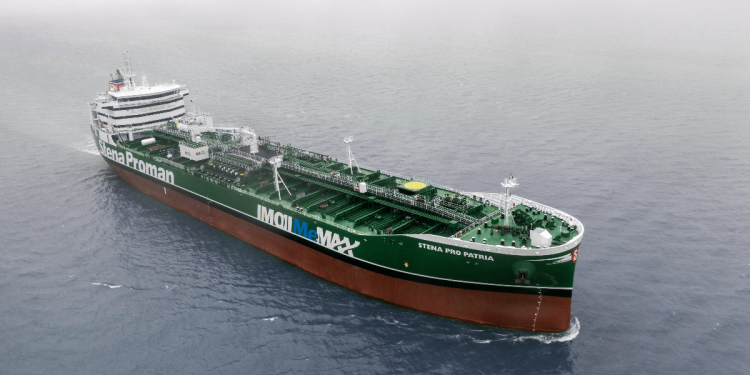 Proman Stena Bulk, a joint venture (JV) between global methanol producer Proman and Stena Bulk,  confirmed that the first methanol-powered newbuild vessel under its partnership has been delivered and is preparing for commercial operation.

The methanol-powered 49,990 DWT Stena Pro Patria is the first of six state-of-the-art, IMOIIMeMAX dual-fuel mid-range (MR) tankers being built at Guangzhou Shipyard International Co Ltd (GSI) in China for Proman Stena Bulk and Proman. Two further vessels, Stena Pro Marine and Stena Promise, are also due for delivery later this year.  Stena Pro Patria will leave GSI Shipyard to load methanol fuel in Ulsan, South Korea and will arrive in Trinidad and Tobago for her Naming Ceremony later this year.

The vessel will run on methanol, representing Proman Stena Bulk’s commitment to methanol’s role as part of the shipping industry’s sustainable fuels pathway. With an expected consumption of 12,500 tonnes of methanol marine fuel per annum, Stena Pro Patria will be a low-emission vessel, eliminating local pollutants including SOx and Particulate Matter (PM), cutting NOx emissions by 60% and reducing CO2 emissions versus conventional marine fuels.

The delivery of the Stena Pro Patria sends an important message to the market that methanol is a reliable and available marine fuel that can reduce global shipping emissions in the short, medium and long term

It is only through collaboration and partnership that we can meet our climate goals.

Furthermore, Anita Gajadhar, MD of Proman Shipping, Marketing and Logistics added that this vessel delivery is the beginning of the low-emission methanol transition for their own vessels, and moving forward, for third-party shipping companies too.